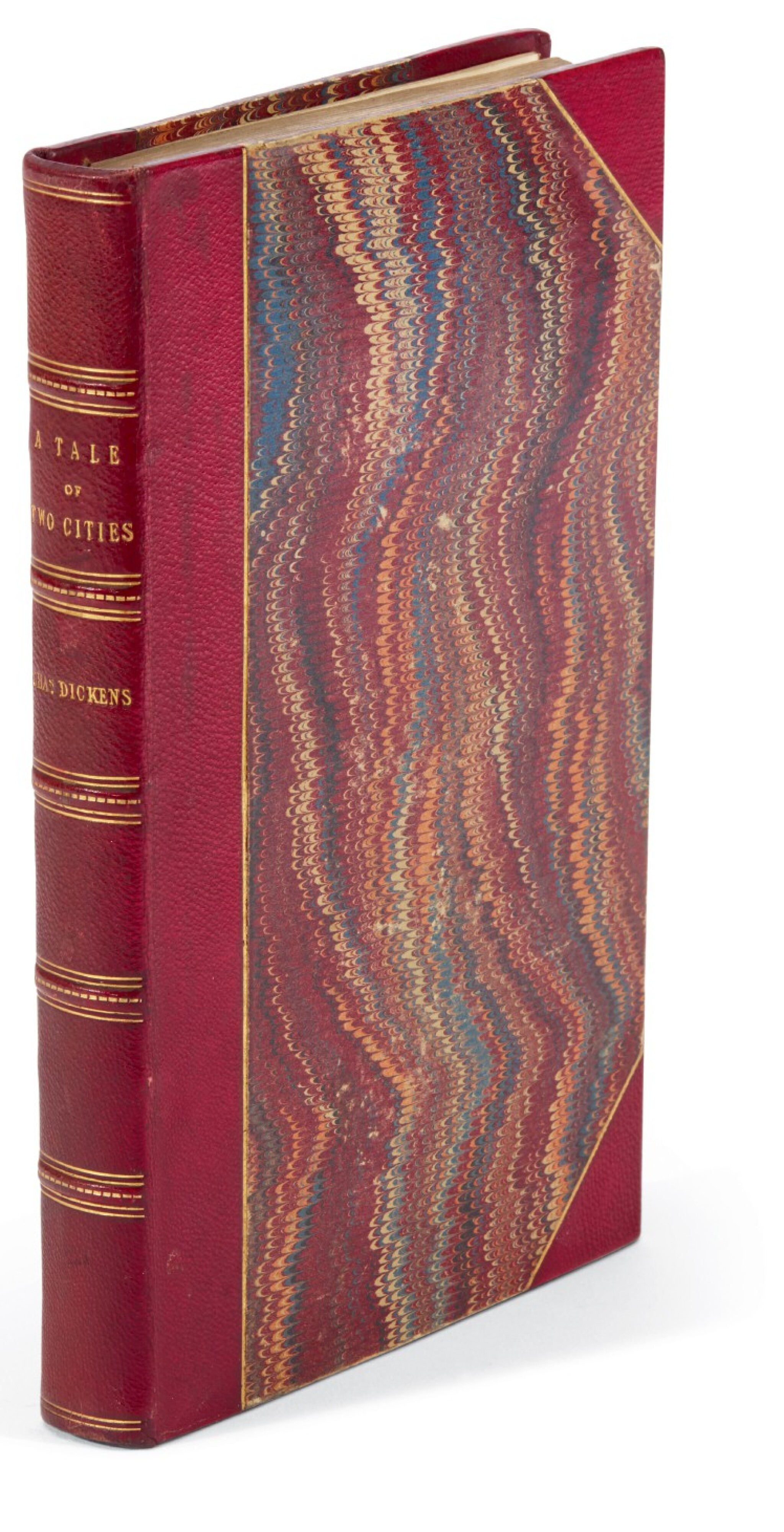 8vo (214 x 134mm.), FIRST BOOK EDITION, earlier issue with the mispagination of p.213 ("113"), etched frontispiece and vignette title by Hablot K. Browne ("Phiz"), AUTHOR'S PRESENTATION COPY INSCRIBED BY DICKENS TO MRS. COWDEN CLARKE ON THE TITLE PAGE ("Charles Dickens | To Mrs Cowden Clarke | With kind regards | December, 1859"), additional inscription beneath in January 1897 by Mary Cowden Clarke presenting the book to Frederick Haines F.S.A., AUTOGRAPH LETTER SIGNED BY DICKENS TO MARY COWDEN CLARKE LOOSELY INSERTED (presenting her with this copy), her retained copy of her original letter to Dickens also inserted with envelope affixed to endpaper, the other plates by "Phiz" and the list of plates removed as in some other presentation copies, SPECIAL PRESENTATION BINDING OF RED MOROCCO GILT, marbled boards and endpapers, preserved in quarter red morocco folding box, spotting to preliminaries and title

A SUPERB PRESENTATION COPY OF ONE OF DICKENS' MOST POPULAR NOVELS, INSCRIBED IN THE MONTH AFTER PUBLICATION TO THE LITERARY SCHOLAR AND WRITER MARY COWDEN CLARKE, ONE-TIME ACTRESS IN DICKENS' OWN PRIVATE THEATRICALS.

Mary Cowden Clarke had played Mistress Quickly opposite Mark Lemon's Falstaff in Dickens's production of The Merry Wives of Windsor, in which Dickens himself played the part of Shallow. In her Recollections, she recalled "What times those were! What rapturous audiences a- tiptoe with expectation...". In her animated letter (2 pages, 8vo, Nice, 18 July 1895 [sic?]) she mentions their "departed actor: joys, and the admirably characteristic signatures of Shallow, Slender, Bobadil" and praises Chapter XIII of A Tale of Two Cities, which had just appeared in serial form ("...I cannot resist the impulse to tell you how intensely I feel its beauty...". In his autograph reply (2 pages, 8vo, Gad's Hill Place, 21 August 1859) Dickens assures her that her praise meant a great deal to her "old Manager" ("...Here in my little country house on the summit of the hill where Falstaff did the robbery scene, your words have come to me in the most appropriate and delightful manner..."). He suggests that she should read the book "all at once" in order fully to appreciate it and sends her this copy ("...it will be a hearty gratification to think that you and your husband are reading it together..."). Referring to a blotting case that the Clarkes had given him in 1848 ("...you must take notice, please, that I have a reminder of you always before me...") he goes on to recall an episode from their theatrical days ("...Lord! To think of the begone Day when you were stricken mute (was it at Glasgow?) and, being mounted on a tall ladder at a practicable window stared at Forster, and with a noble constancy refused to utter word! Like among the pictures with Wilkie I begin to think that the real world, and this the sham that goes out with the lights..."). Dickens' letter is published in the Pilgrim Edition of The Letters, volume 9, pp.109-10.