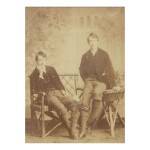 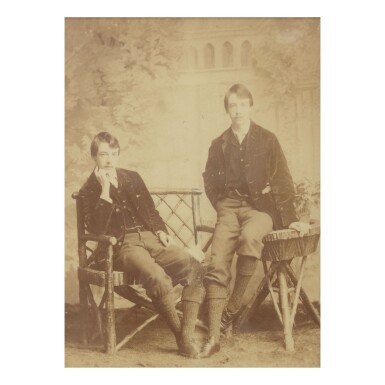 "Graham Robertson twice over (Trick photographs from 2 negatives" (inscription in ink on verso of photograph).

W. Graham Robertson (1866–1948) is perhaps best-known today as the pale, elongated aesthete in John Singer Sargent's elegant full-length portrait of 1894. Robertson was, however, a remarkable renaissance man of the late Victorian era. He was a painter, illustrator, writer, and art collector (most notably of the works of William Blake). He designed costumes for Sarah Bernhardt, Ellen Terry, and other lights of the London stage. He was something of a social butterfly and knew a great many people in literary, theatrical, and artistic circles in the London of his time. Oscar Wilde, Aubrey Beardsley, George Bernard Shaw, and Henry James were all counted among his friends.