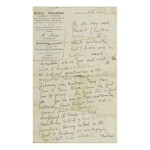 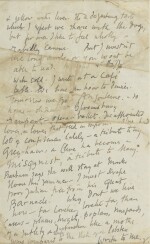 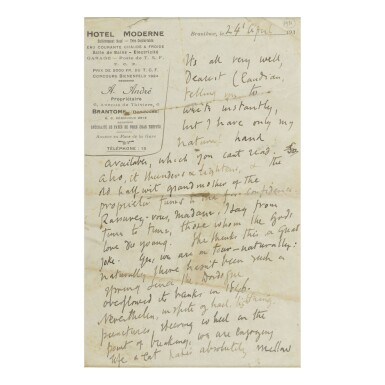 A fine discursive letter, written at the end of Virginia and Leonard Woolf's motor trip through southwestern France in the spring of 1931. Writing to her nephew—and future biographer—Woolf gives news of her travels, quotes a famous maxim of Menander (as delivered to her elderly French housekeeper), mentions Quentin's brother Julian and his father, speaks ambiguously of Bloomsbury, and wonders whether it might be better to live in the French countryside.

"It's all very well, Dearest Claudian, telling me to write instantly, but I have only my natural hand available which you can't read. Also, it thunders & lightens, & the old half-wit grandmother of the proprietor turns to me for confidence. Rassurez-vous, Madame, I say from time to time, those whom the Gods love die young. She thinks this a great joke. Yes, we are on tour … we are enjoying life and eat pâtés absolutely mellow and yellow with liver. It's a disgusting taste which I expect we share with the dogs, but for once I like to feel wholly and rabidly canine. … Tomorrow we go … home—oh dear—to Bloomsbury rampart—opera—ballet—disappointed lovers, & lovers that feed on vapour. I've had lots of confidences lately—a tribute to my grey hair, & Clive has become a misogynist, a tribute to Mary [Hutchinson]. Barbara says she will stay at Monks House this summer—I must scrape poor Julian free from his great Barnacle. Why don't we live here—far lovelier, lovelier far, than Cassis—plains, heights, poplars, vineyards, of a subtlety & distinction like a moth's wing compared with the shell of a lobster. …"

1931 was a momentous year for Woolf. She finished her novel The Waves in February, making corrections to it in the spring and summer, before it appeared, to considerable acclaim, in October. Her corespondent here, Quentin Bell, was, of course, the son of Woolf's sister (and fellow member of the Bloomsbury group), Vanessa Bell, who provided outstanding dust-jacket illustrations for a number of Virginia's books. Quentin Bell's two-volume biography of Woolf was published by the Hogarth Press in 1972.