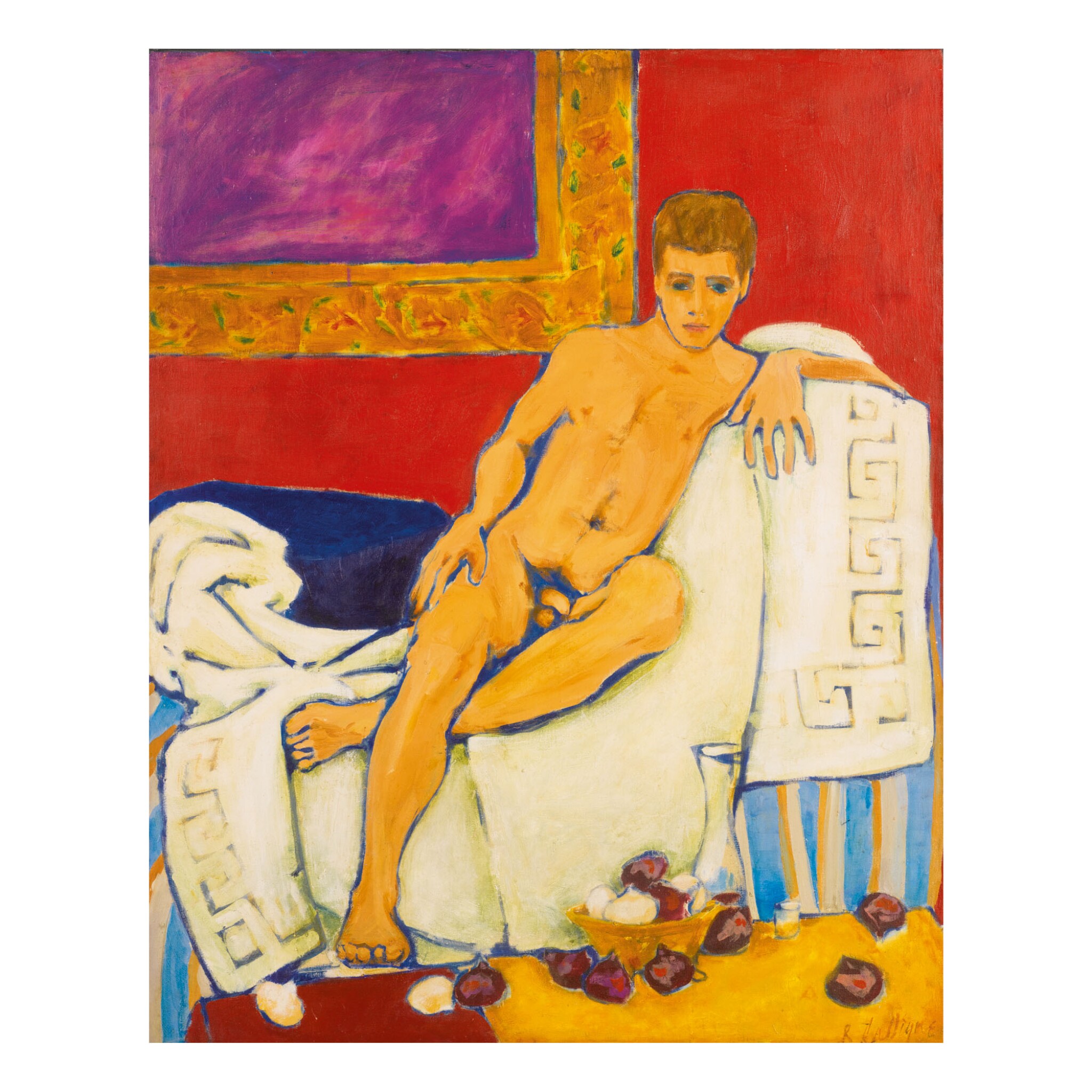 Beat Art: Visual Works by and about the Beat Generation, p. 15

"Shocked by love." One of the most important and iconic paintings of both the Gay Liberation movement and the Beat movement in mid-century America.

In 1955, after traveling in Mexico, Beat poet Allen Ginsberg settled in San Francisco for several years. One night on Polk Street, he noticed a stranger "looking poor & interesting with a beard." Ginsberg approached the man "and wanted something beautiful to happen, I'd end up that night in some angelic bed … anyway, embarrassed, went up and talked to him because he had a beard." The man was artist Robert LaVigne. The pair walked up Polk to LaVigne's apartment and studio at 1403 Gough Street and talked about art as they walked. According to Ginsberg, "[W]e talked about Cézanne—I had a theory of space ellipse in Cézanne which I manufactured in the basement of NY Museum of Modern Art hi on T looking at the View of Garonne drawing—he understood all that … all this to say that we had a long interesting theoretical conversation, I was amazed at his seriousness, almost religious, toward his art & thought him a sure & trustful brother. First picture I saw in his Gough Street house was a huge naked portrait of Peter Orlovsky—I looked in its eyes & was shocked by love." This was one of the key aesthetic events in Ginsberg's life and one he remembered till the day of his death. On another occasion, he wrote of the portrait, "[S]omething happened sort of between me and it; that is, like I fell in love with it, and so I was delighted a few minutes later when Peter actually walked in the room."

LaVigne and Orlovsky, who had recently been discharged from the Army, were living together. Ginsberg moved in with the pair, which caused what the poet called "great magical personality hassles." In short order, Ginsberg stole Peter from Robert. The painter was so heartbroken that he moved to Mexico for a time. He later resumed his friendship with the two men.

Ginsberg and Orlovsky were together as a couple from that time until the poet's death in 1997. In 1955 they commemorated their relationship with a commitment ceremony in San Francisco. Ginsberg wrote of the ceremony, "At that instant, we looked into each other's eyes and there was a kind of celestial cold fire that crept over us and blazed up and illuminated the entire cafeteria and made it an eternal place."

Shortly after meeting Orlovsky, Ginsberg composed his important autobiographical poem "Malest Cornifici, tuo Catullo," in which he addresses Jack Kerouac: "I'm happy, Kerouac, your madman's finally made it: discovered a new young cat, and my imagination of an eternal boy walks on the streets of San Francisco, handsome, and meets me in cafeterias and loves me…." Ginsberg maintained that he wrote his poetry principally for his two muses, Jack Kerouac and Peter Orlovsky. Ginsberg and Orlovsky inevitably became symbols of the Gay Liberation movement. The 1967 Richard Avedon photograph of the two men nude and embracing, was widely circulated at the time as a poster and appeared on the cover of the Evergreen Review. In addition to being Ginsberg's partner and muse, Orlovsky published several volumes of poetry (Strange Hearts' Delight, Clean Asshole Poems, etc.), appeared in films by Robert Frank and Andy Warhol, protested the Vietnam war and nuclear armaments. He was at Allen Ginsberg's side when the poet died in 1997.

Artist Robert LaVigne (1928–2014) was, according to poet Michael McClure, "the nearest thing to a an official Beat artist" Ginsberg called his "court painter to the Beats." His most memorable work was done in 1950's and 60's San Francisco when he was at the center of the Bay Area Beat scene. LaVigne served as inspiration for characters in two Kerouac novels: Robert Browning in Big Sur and Levesque in Desolation Angels. Although Allen Ginsberg several times expressed his desire to own the painting, it remained in LaVigne's possession until 2008.

Nude with Onions has been exhibited widely, reproduced frequently, and continues to be one of the most recognizable images of the 20th-century Gay Liberation movement. Earlier this year, the painting was used as the cover illustration for What's Left of the Night, Ersi Sotiropoulis's novel about the poet C. P. Cavafy.

A powerful and historically important painting which still resonates strongly in the twenty-first century.