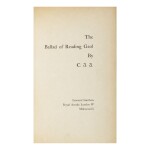 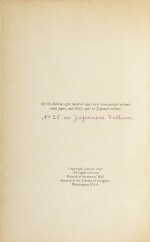 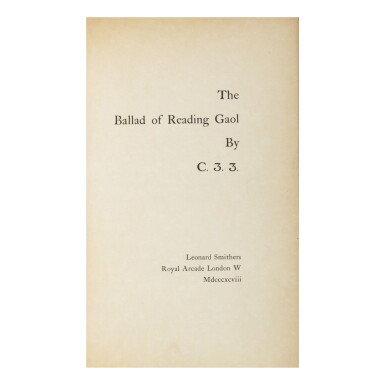 First edition of one of the finest narrative works of modern poetry. This is number 25 of 30 copies printed on Japanese vellum (of a whole edition of 830) copies; the publisher's handwritten limitation is in purple ink above the copyright notice.

"The Ballad of Reading Gaol" was likely begun while Wilde was serving two years at hard labor in that prison after being convicted of "gross indecency." The central character of the poem was inspired by a trooper in the Royal Horse Guards, Charles Thomas Wooldridge, who was executed by hanging, 7 July 1896, in Reading Gaol for the murder of his wife. Wilde dedicated the poem to Wooldridge's memory. Wilde's name did not appear on the title-page of the poem until the seventh edition (although the third edition of 99 copies was signed by him); the author is here denominated, as he was in prison, by his ward, floor, and cell: C.3.3.

The present copy comes from the library of Lena Ashwell (1872–1957), a theater actress, manager, and producer, who toured in Wilde's Lady Windermere's Fan shortly after its premiere in 1892. She appeared on Broadway, managed the Savoy Theatre, and established her own theater, the Kingsway. According to her biographer, Ashwell was particularly troubled by Wilde's arrest and later wrote, "the atmosphere of London was horrible and cruel. His plays were so very brilliant, and I had seen this when I was in Lady Windermere's, so I felt that he was a friend and in desperate trouble" (Leask). During World War I she organized plays, concerts, and other entertainments for British soldiers in France.

The most desirable issue of Wilde's greatest poem, with distinguished provenance.