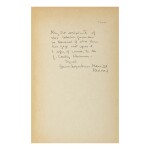 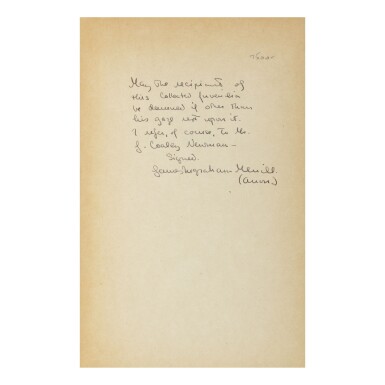 First edition of Merrill's first book. Presentation copy, inscribed to his close Amherst friend Coley Newman, "May the recipient of this Collected Juvenilia be damned if other than his gaze rest upon it. I refer, of course, to Mr. L. Coaley Newman — Signed, James Ingraham Merrill (Anon.)" The poet has misspelled both his own middle name (Ingram) and Newman's name ("Coley"). This is most likely a private joke between friends.

This book was privately printed by Merrill's father Charles E. Merrill, a founder of Merrill Lynch. "Surreptitously, Charlie gathered copies of the boy's Lawrenceville poems and prose, … ordered these by chronology, and had them printed on thick stock in a hardbound limited edition of 200 copies …. The book was a surprise timed for Christmas 1942 …. Jim's Book, James Merrill commented forty years later, 'thrilled me for days, then mortified me for a quarter century.'" (Hammer).