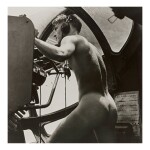 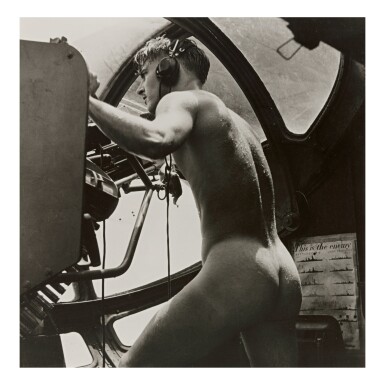 This gelatin silver print is in generally excellent condition. When examined in raking light, the following are visibile: a few soft creases in the image and margins; and a tiny deposit of original retouching at the left edge. There is a small area of yellowing at the edge of the upper margin. The margin corners are softly bumped.

'…we got a call to pick up an airman who was down in the Bay. The Japanese were shooting at him from the island, and when they saw us they started shooting at us. The man who was shot down was temporarily blinded, so one of our crew stripped off his clothes and jumped in to bring him aboard. He couldn’t have swum very well wearing his boots and clothes. As soon as we could, we took off. We weren’t waiting around for anybody to put on formal clothes. We were being shot at and wanted to get the hell out of there. The naked man got back into his position at his gun in the blister of the plane.'