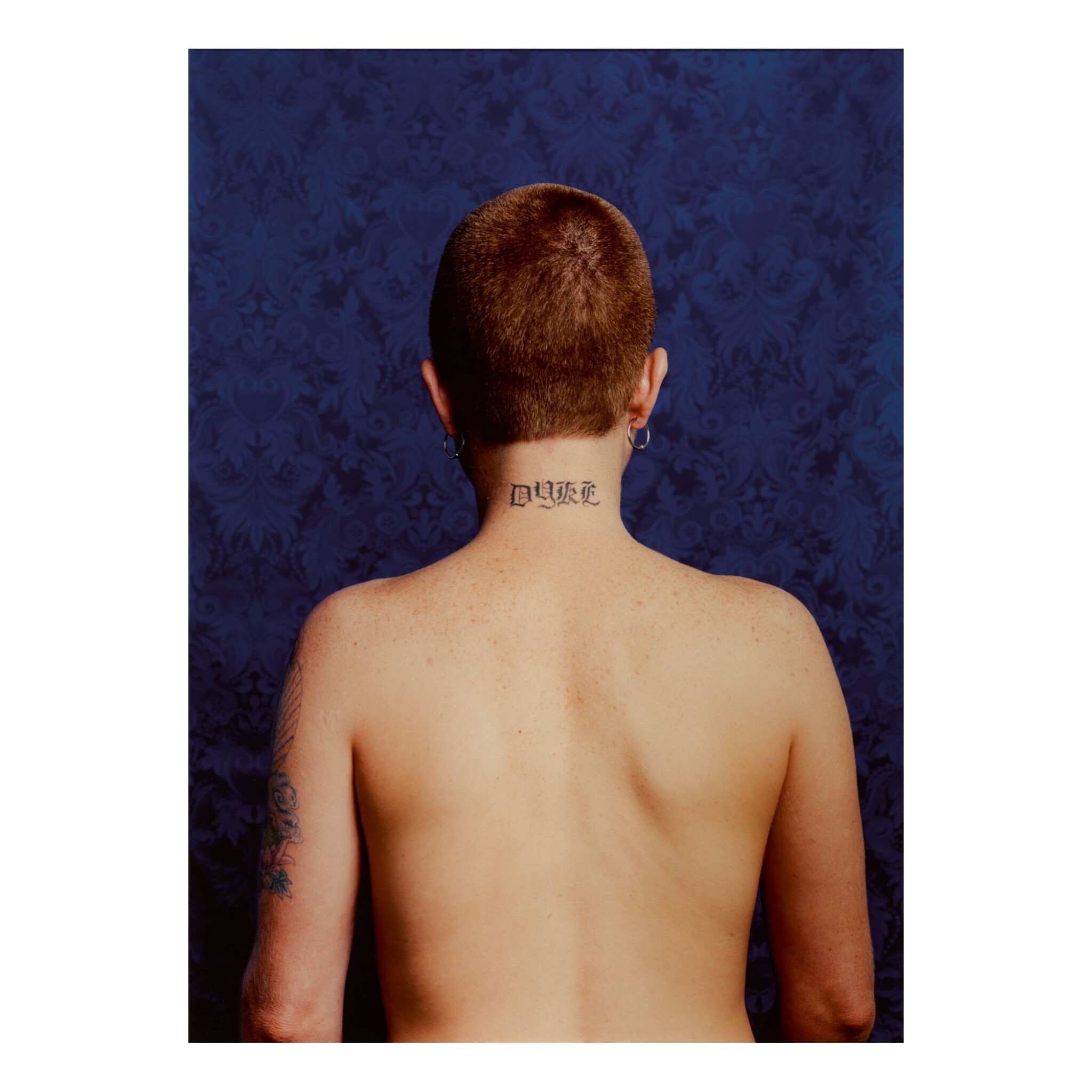 framed to the photographer's specifications

While this chromogenic print has not been examined out of its frame, it appears to be in generally excellent condition. The colors remain bright and saturated, with no apparent fading. There is a thin line of original retouching at the lower right edge, in the sitter's right arm, and a few other tiny deposits in the upper portion in the blue background.

Acquired from the above by the present owner in 1995

Catherine Opie has declared, 'I am an American photographer. I have represented this country and this culture. And I’m glad that there is a queer, out, dyke artist that’s being called an American photographer.' Images from her series Portraits (1993-97) offer a blunt visual counterpoint to mainstream heterosexual culture by showcasing the tattoos, piercings, and clothing favored by members of the LGBTQ community. In the mid-1990s, Opie made frequent trips from her home base in Los Angeles to San Francisco, where she had become a participant in the Bay Area’s vibrant sadomasochistic leather culture while she was a graduate student at the San Francisco Art Institute. Opie explained in a 1994 interview, 'The leather scene was about community for me, and I was inspired by all these people who were giving themselves the freedom to image themselves however they saw fit.'

Opie used a 4 x 5 camera to make highly detailed photographs that position each sitter against a solid backdrop in order to highlight each person’s individual style. Opie has explained, 'the colored backdrop allows your eye to go through the photograph in a different way than if it was, say, a person sitting in their house. It’s about separating the subject from their world, but still representing their world through their body.' Opie’s disengagement of her subjects from their natural surroundings reflects the influence of Hans Holbein the Younger’s regal sixteenth-century portrait paintings of historical figures such as Henry VIII, Sir Thomas More, and Christina of Denmark. Taking Holbein’s work as a point of reference, Opie captured well-known people including Ron Athey, Diane DiMassa, and Justin Bond. She also made a full-length portrait of Bo (see lot 26), Opie’s mustached drag king persona dressed in a sleeveless plaid shirt, jeans, and work boots. 'Bo’s a character I just fell in love with. He represents the quiet, psychopath side of me and is a way for me to play with ideas Cathy would never be able to play with,' the artist has explained.

Dyke engages with many of the same formal and social issues as the Portraits series. Rather than focusing on her unnamed subject’s face, in the present photograph Opie trains her camera on the back of a woman whose cropped hair and fair skin are punctuated by a tattoo of the word ‘dyke’ at the nape of her neck. By claiming a moniker that in other contexts might be a slur, the sitter proudly owns her sexuality – and by extension, her chosen community – etching it permanently on her body. The vivid blue damask used for the backdrop alludes to traditional materials and conservative values, as does the Old English font of the tattoo. Opie brilliantly juxtaposes the overall formal harmony of the picture with its subversive context to make a complex image exploring nuances of sexuality and gender.