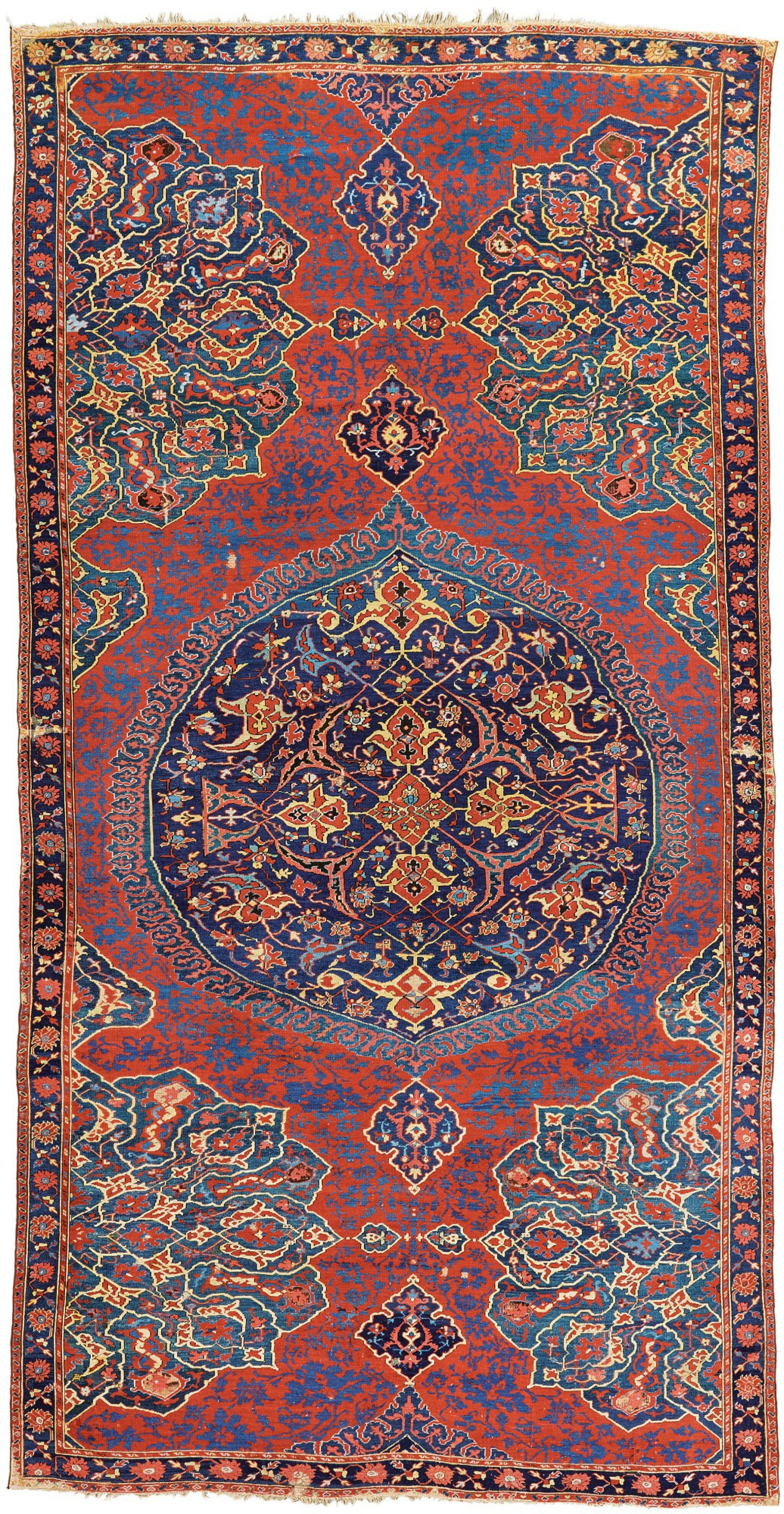 wool pile, the madder ground with overall lapis blue palmette vines around a central large deep blue ogival medallion containing interlaced arabesques and floral motifs, flanked to each side by a pair of green, yellow edged medallions and pendants inset with radiating red palmettes and arabesques, with a further two smaller medallions of the same floral motif in red above and below the central ogival, within a deep indigo border with vine leaf and floral motifs,

To request a condition report for this lot, please contact the department at benedict.carter@sothebys.com

A notable survivor of sixteenth century Oushak carpet production, distinguished by its remarkable condition, and with a rich and unusually varied palette, which allows us to appreciate today the luxurious production of the Ottoman weaving ateliers.

Scholars generally date the original development of the Oushak ‘Medallion’ carpets to the second half of the fifteenth century, based on the close affinities between the design of works of art in other media, such as ceramics, metalwork and bookbinding, and the motifs found in extant Oushak carpets, as discussed by Julian Raby in ‘Court and Export: Part 2, The Ushak Carpets’ in Oriental Carpet and Textile Studies, Vol 2., ed. Pinner, R and Denny, W, London 1986, pp.177-88; Suriano (Suriano, Carlo Maria: ‘Oak leaves and Arabesques’, Hali, 116, May-June 2001, pp.106-115 and Jon Thompson (Thompson, Jon, Milestones in the History of Carpets, Milan, 2006, pp.90-101). Thompson illustrates, for example, tilework in the Chinili Kiosk in Istanbul, built in 1472, op. cit. Fig. 78, p. 94 and the sword of Mehmet II (r. 1451-81) in the TKS, Istanbul, which are decorated with a stylised lotus leaf motif which appears as an inlay design (in yellow on blue, or as here in blue on red) in the fields of Oushak ‘Medallion’ carpets and is a consistent feature throughout the long years of their production: the design of these carpets proved so successful that they continued to be produced beyond the sixteenth century into the seventeenth, and even eighteenth century, and remained sought-after export goods throughout. Their on-going popularity is evidenced in 16th century inventories, such as those of Bess of Hardwick, and in European paintings, for example ‘The Visit to the Nursery’ by Gabriël Metsu (Dutch, Leiden 1629–1667 Amsterdam), of 1661, MMA, Acc. No. 17.190.20.

Laid into, but not over, the lotus design of the field, is a large ‘onion’ shaped medallion filled with an elaborate polychrome interlace of stems, some of which form kufesque knots, issuing split rumi leaves and small palmettes. The flaming ‘cloud-collar’ typical of these medallions is here executed in a mid-jade green with deep pink vinery, an unusual colour combination for these carpets and as noted in Hali 196, op. cit., p. 137, one which is shared by just two other known examples, a single medallion carpet sold at Sotheby’s, London on 9 October 1991, Lot 170, see Hali Issue 60, p. 155) and another sold Christie’s, London on 26 October 2017, Lot 307. The border seen in the present lot is also unusual in the sense that it is directional: it consists of a small pattern unit of a lotus-palmette springing from a spray of small leaves, running up the sides of the carpet and facing left at the top and right at the bottom. Whilst the drawing is consistent, variety is added through changes in colour of infill and outline. The split leaf cloud-collar motifs which append the main medallion are mirrored at each end of the carpet, and between them are the characteristic elaborate multi-petalled secondary part-medallions, here in a riot of colour including a bright azure blue, together with the red, pink, yellow and jade green found elsewhere in the carpet. This exuberant use of colour is enhanced by the remarkable condition, which gives us a rare opportunity to experience an Oushak ‘Medallion’ carpet as was intended by its original makers.