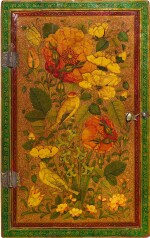 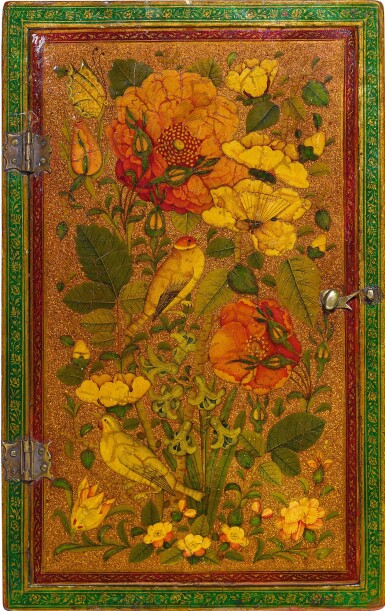 both rectangular form, one with removable cover, the interior depicting Ali with his two sons Hasan and Hussein, missing mirror, cartouche with stamp of maker's name, and the other with hinged cover revealing the depiction of an iris flower surrounded by calligraphic cartouches, including maker's name and date, and a mirror, both with exteriors decorated with birds and butterflies within a floral setting

Both in generally good condition, one missing the mirror, internal sides with some general wear and abrasion, small nicks to edges, cover slightly distorted (curved), the other with some wear around the mirror which is slightly loose, craquelure to surface, as viewed.

Couplets from a tarji’-band of Sa’di and one couplet from a ghazal of his.

Although the lacquer painter Muhammad ‘Ali ibn Muhammad Husayn al-Isfahani is not recorded, the case maker’s seal impressions have been seen on many pen-boxes of the second half of the nineteenth century.