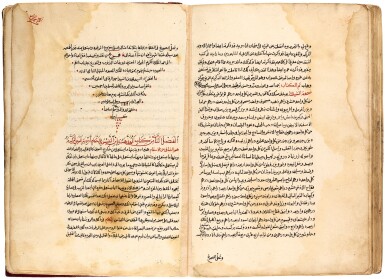 Arabic manuscript on watermarked paper, 102 leaves plus one fly-leaf, 25 lines to the page, written in naskh in black ink, important words, titles and headings in red, in red leather stamped binding, the doublures with gilt cut-out medallions

This volume is an interesting collation of texts from two important authors of the thirteenth century: al-Haruni and Ibn al-Nafis. The book, written on European watermarked paper, was copied in Mecca, during the period of Ottoman rule.

The first treatise in this volume is by Abu al-Muna Dawud b. Abi Nasr, better known as al-Kuhin al-'Attar al-Isra'ili al-Haruni. Al-Haruni was a Jewish pharmacist active in Cairo in the middle of thirteenth century. The Minhaj ad-dukkan wa dustur al-a'yan fi'l-tibb wa'l-saydalah, translated as 'The Management of [Apothecary] and Regulations of Important Matters in Medicine and Pharmaceutics' is a comprehensive manual on pharmaceutical practice and ethics compiled for the author’s son. Completed in 1260 AD, the text is divided into twenty-five chapters and lists simple and compound remedies and their use. For a complete list of the chapters, see N. Serikoff, Arabic Medical Manuscripts of the Wellcome Library: A Descriptive of the Haddad Collection, Sir Henry Wellcome Asian Series, 6, Leiden, 2005, pp.200-5. Other copies are in the Bodleian Library, Oxford (see E. Savage-Smith, A New Catalogue of Arabic Manuscripts in the Bodleian Library, University of Oxford, volume I, Medicine, Oxford, 2011, pp.603-9, entry no.171). Another copy dated 1316-17 AD is in the British Library (inv.no.Or.5786); one dated 1262 AD was sold at in Christie’s London, 14 October 1997, lot 81, and another dated 1481-82 was offered in these rooms, 25 April 2012, lot 425. See also Brockelmann, GAL, I. 492 (648) and S., I. 897.

The second treatise, starting at f.98a, is an extract (chapter II) from Kitab al-muhadhdhab fi ‘l-kuhl by ‘Ala’ al-Din Abu’l-Hasan ‘Ali b. Abi al-Hazm al-Qurashi, known as Ibn al-Nafis (d.1288-89 AD). The treatise is an encyclopaedia of ophthalmology and this particular chapter talks about the different uses of an ointment for the eyes (how to prepare the remedy, how to crush it properly and how to mix it in order to prepare the medicine). Ibn al-Nafis is renowned for his commentaries on Ibn Sina (see a copy sold in these rooms, 7 October 2015, lot 208) and his revolutionary study of the pulmonary circulation, where he theorised that blood travelled from the heart to the lungs, back to the heart and then throughout the body. Born near Damascus, Ibn al-Nafis studied medicine at the Nuri Hospital under the supervision of Muhadhdhib al-Din ‘Abd al-Rahim b. ‘Ali known as al-Dakhwar. He later moved to Cairo, where he became Chief Physician of Egypt and was personal physician to Sultan Baybars I. Whilst in Cairo, he likely worked and taught at Nasiri hospital where he trained several pupils, the best known of them being Ibn al-Kuff, an author of a work on surgery. He died in Cairo in 1288 AD and left his entire estate, including his fortune and books, to the Mansuri hospital.