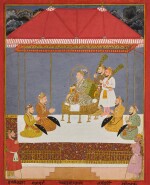 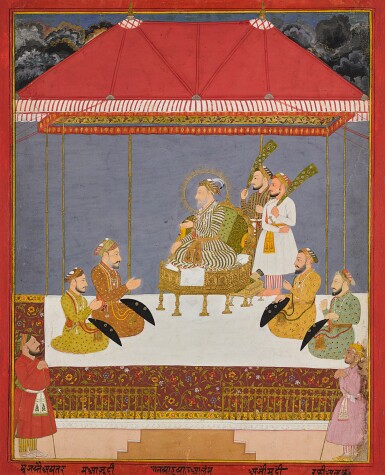 gouache heightened with gold on paper, with an identification inscription in black Devanagari

Muhammad Mu'azzam (1643-1712), the second son of the Emperor Awrangzeb, succeeded his father in 1707 at the age of 63, as Shah Alam Bahadur, known as Bahadur Shah I. Stuart Cary Welch describes him as “a soldier to the core, he is said to have spent only four nights in palaces (the rest of the time in tents) during the five years of his reign” (Welch 1985, p.361). His battles and victories were numerous, and an unusually large painting shows the Emperor Bahadur Shah I in the midst of one such battle (Maharaja Sawai Man Singh II Museum, Jaipur, inv.No. AG-1401). Painted in the early eighteenth century, it was commissioned by his enemy, Sawai Jai Singh, probably shortly after Bahadur’s death, possibly to “[…] ponder the portrait of his generous enemy, whose life was drained away by a succession of victories” (ibid. p.364). This tall portrait which depicts him with his four sons, his legacy, in an elegant and regal tent, must have been commissioned around the time that he became Shah Alam Bahadur.