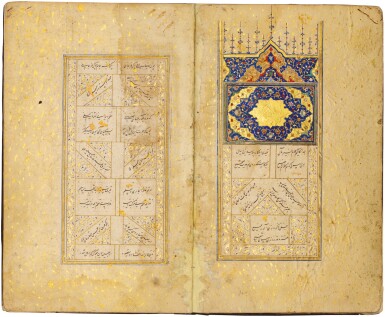 Chaghatai Turkish manuscript on gold sprinkled paper, 10 leaves, plus 2 fly-leaves, 13 lines to the page, written in nasta’liq in black, blue and light green ink, text divided into two columns and written horizontally and obliquely, ruled in blue and gold, f.1b with a polychrome and gold heading (‘unwan), in cardboard binding

The margins clean, with pages marked by European numerals written in pencil on the upper external corner, some stains and smudges, some restoration to the paper, minor losses to the illumination, as viewed.

The current manuscript was in the possession of an Ottoman called Muhammad Yamini ibn Muhammad who left his oval seal impression below the note. The name ‘Ali Pasha is also on top of the page.