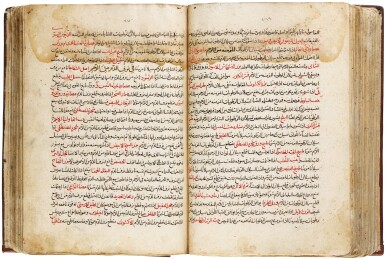 In overall good condition, the margins with damp, stains and holes, some annotations on the margins, including a Hebrew inscription on f.180a (using the Persian numerals on the external upper edge), the pages have been numbered in pencil (upper centre of the leaf) and pen (upper external edge), incomplete and misbound (the last three leaves concern with something treated in the beginning of the volume), the beginning and end of the manuscript with replaced pages in a more provincial hand, as viewed.

The contents of the present volume are as follows:

Bab III: on illnesses of the ears, their diseases and tumours.

Bab IV: on illnesses of the nose and nose bleeds.

Bab V: on illnesses of the mouth and the dysfunction of the tongue.

Bab VIII: remedies for the intestine, the softening of the stomach and laxatives.

Bab XII: remedies for the male and female reproductive organs.

Bab XIII: remedies for illnesses of the uterus.

connection with Egypt. On one page the writer mentions that a particular medicine was tried in Fustat, while on another page it is said that chillies were usually imported from Sudan.