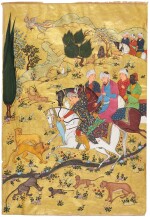 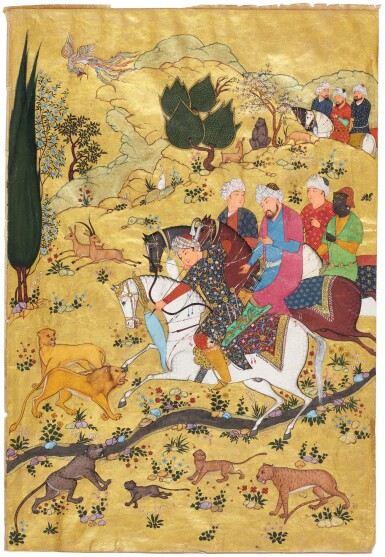 gouache on paper heightened with gold, the reverse and additional text folio with 23 lines of black nasta’liq, headings in red

Minor creases and losses to the painting, but the colors bright, minor smudges and holes in the additional folios, as viewed.

Hossein Behzad (d.1968) moved to Paris in 1934 where he stayed a little over a year to study different schools of painting. It was during his residency in France that he developed a new style of painting, combining the traditional Safavid style with more contemporary aspects. His works have been exhibited all over the world, including Iran (in the Iran Bastan Museum, 1953 on the occasion of the millennium of Ibn Sina); France (the Museum of Modern Art, Paris, 1955); The United States of America (the Library of Congress, Washington D.C., 1956), and Finland (the Olympic Painting Exhibition, Helsinki, 1952).