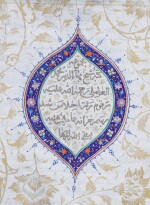 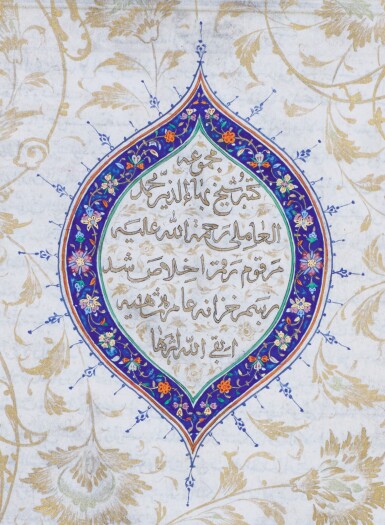 Arabic and Persian manuscript on cream and light blue paper, 612 leaves plus 2 fly-leaves, approx. 32 lines to the page written in black naskh and nasta’liq in different hands, titles and important words in red, numerous illuminated headpieces and cartouches to indicate the beginning of a new section, f.1a with a polychrome and gold shamsa against a gold foliate ground, in dark red leather gilt-stamped binding, decorated with an almond-shaped medallion

The margins have been cropped but are overall clean, with commentaries, stains and smudges, some restoration to the paper, some illumination incomplete, as viewed.

Baha al-Din Muhammad ibn al-Husayn al-‘Amili (d.1622) was born in Baalbek in 1547. At a very early age he followed his father to Persia and moved to Qazvin to study. After his father’s death, he became Sheykh al-Islam in Isfahan during the reign of Shah Abbas I (r.1587-1629). He was a very prolific writer, composing more than one hundred treatises both in Arabic and Persian, both of a religious nature as well as on astronomy and mathematics. Baha al-Din spent many years travelling outside Persia, visiting Egypt, Jerusalem and undertaking the Hajj. He spent the last years of his life in Isfahan where he died in 1621.

The current volume is an exceptional selection of Al-'Amili's works, executed by different scribes between 1026 AH/1616 AD and 1056 AH/1647 AD in the Deccan. Several colophons mention the city of Golconda (today’s Hyderabad), and given the distinctive colour scheme of the illumination, a Deccan attribution can be strongly surmised. Baha al-Din al-‘Amali must have been quite popular in India, as Rosenfeld and Ihsanoglu list several volumes in the libraries of the North and Central Subcontinent (see Rosenfeld & Ihsanoglu 2003, pp.348-50).

More than one calligrapher is mentioned within the manuscript, some of whom are recorded: Ahmad ibn ‘Ali al-Makki al-Shirazi, who copied Kitab mashriq al-shamsain wa ’iksir al-sa’adatain (4) is probably Ahmad ibn ‘Ali Ardestani (a city not far from Shiraz), who was one of the physicians who wrote books on medicine for Sultan Muhammad Qutb-Shah. Ruzbihan ibn ’Imad al-Isfahani, who copied Arba’un hadith (6), was the son of Fazlullah ibn Ruzbihan, who left Safavid Iran for India. His son Ruzbihan ibn ‘Imad Khunji Isfahani is known to have been in Isfahan and a pupil of Baha’ al-Din ‘Amili, but following his father, he went to the court of the Qutb-shahs.

The volume contains the following treatises:

5. Sharh dua’ al-hilal min kitab hada’iq al-salihin, A commentary on the 34th prayer which is recited at the appearance of the crescent at the beginning of the month. See GAL, S.II p.596, no.14.

7. Arba’un hadith, Forty Sayings of the Prophet (see no.6), copied by Ahmad ibn ‘Ali al-Makki al-Shirazi in Hyderabad, known as Golconda. The colophon partially gives the date as Saturday 20 Safar but does not mention the year. However, the scribe also copied no.4 and gave the date 1037 AH/1627-28 AD.

15. Risala fi tahrim daba’ih ahl al-kitab, a short treatise on the prohibition of animal sacrifices of the 'People of the Book' (Christians and Jews). With a dedication to the Safavid Shah ‘Abbas al-Husseini (Shah ‘Abbas II, r.1642-66).

19. Risala dar karr, a treatise on measuring the capacity of wells, small cisterns and sandy grounds where water collects and filters itself, Persian text, with a dedication to the Safavid Shah Tahmasp I (r.1524-76), copied by the scribe Muhsin ibn Ashraf al-Husseini al-Musawi (the scribe gives the date 1056 AH/1646-47 AD in no.8). See Rosenfeld and Ihsanoglu, no.1058, no.13.

21. Risala mukhtasara fi fiqh al-salat, an abridged treatise on the teaching of prayers.

33. Risala jiha al-qibla, treatise on the direction of the Qibla, see Rosenfeld and Ihsanoglu, no.1058, no.A11.

34. Tashrih al-aflak, Explanation of Celestial Spheres, an astronomical treatise illustrated with diagrams, see Rosenfeld and Ihsanoglu, no.1058, no.A.1, another copy is in Hyderabad. See GAL, p.595, no.6.

37. Tuhfa-yi hatimiyya dar fann-i astrulab, Gift to Hatim on the Science of the Astrolabe, Persian text, see Rosenfeld and Ihsanoglu, no.1058, A.5.

38. Hashiya ‘ala sharh mulakhkhas al Jaghmini, a commentary on the 'Compendium' of Jaghmini, a treatise on astronomy, with a dedication to Shah Abbas II, copied by the scribe Muhsin ibn al-Ashraf al-Husseini al-Musawi (the scribe gives the date 1057 AH/1646-47 AD in no.8), another copy is in Hyderabad, see Rosenfeld and Ihsanoglu, no.1058, A.16.

39. Al-Fawa’id al-samadiya fi ‘ilm al-‘arabiya, a treatise on the Arabic language, see GAL, p.596, no.9. The dates 975 AH/1567-68 AD and 1005 (in abjad: gh d a) that appear at the end of the text are those of when the author completed the composition of the treatise and the writing of the original copy respectively.