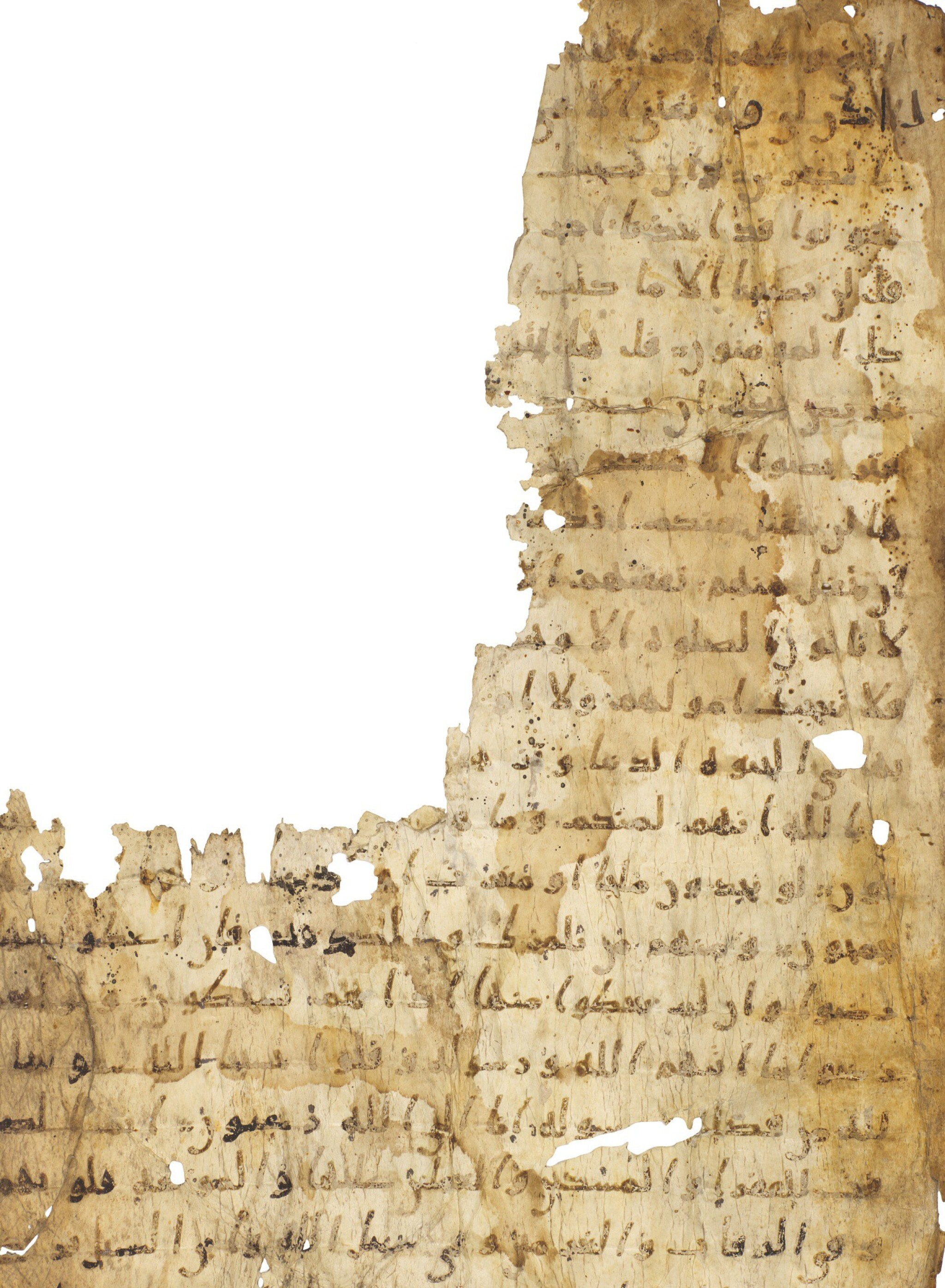 Arabic manuscript on vellum, 23 lines to the page, written in Hijazi script in brown ink

In fair overall condition, the upper right side of the folio missing as visible in the catalogue image, various holes in the leaf, creasing, and a few stains, otherwise script legible, as viewed.

This rare vellum leaf belongs to the earliest group of Qur'an manuscripts, which are also considered the earliest examples of any sort of Arabic manuscript. These Qur'ans have been dated to the second half of the seventh century, only decades after the death of the Prophet Muhammad. Not only is this leaf of tremendous religious significance as a relic of the earliest period in Islam and the textual transmission of the Qur'an, but it is also an important milestone in the development of Arabic as a written language and the evolution of Arabic scripts.

The early history of the Qur'an

Very few leaves from such Qur'an manuscripts have survived, and therefore this leaf is important for the documentation of the early collections of text that were written sometime between the Prophet's death in 632 AD and the death of the Caliph 'Uthman in 656 AD. Several copies of the Qur'an, some in sheet form, some in codex form, were compiled under the supervision of one of the Prophet's former secretaries, Zayd ibn Thabit. These authoritative codices were then sent out to the main metropolitan centres of Islam at the time. The exact list of cities to have received a copy is not certain. Some reports suggest that four copies were sent out while others suggest as many as seven. It is likely that at least Mecca, Damascus, Basra and Kufa received a copy, while one must have been retained in Medina. The early collections of the text were based on a combination of sources: the memories of the Companions of the Prophet, the sheets in the possession of Hafsa, the daughter of 'Umar and one of the widows of the Prophet and on the fragments which had been written down during the lifetime of the Prophet by Companions and secretaries, mostly during the Medinan phase of his mission.

The early development of the Arabic script

One of the main characteristics of the early Hijazi script is the vertical stretching of the letters, particularly visible in the elongated forms of the alif, lam and kaf. This vertical emphasis also extends to shorter letters such as waw, nun and ha. An unusual feature is the extension of the alif, alif maqsura and ya backwards underneath several preceding words. Other distinctive features are the vertical format of the leaf which gradually evolved into the horizontal format in the early part of the Abbasid period (750-1258 AD), and the inconsistency in orthography and line spacing as a result of the presence of many scribes working on a single codex and the prioritization of faithfully reproducing the Qur'anic text over aesthetic considerations.

The infrequent use of diacritical and orthographic markings indicate that this leaf was written before a comprehensive system of diacritical marks on consonants in the form of dots or vertical dashes was devised by al-Hajjaj bin Yusuf, who died in 714 AD. This was an important development as it meant that consonants of identical form could be distinguished from one another. The other great aid to the development of the easily readable script was the invention of the coloured dots to indicate vowels. This invention has been attributed to Abu'l-Aswad al-Du'ali who died in 688 AD.

The majority of surviving fragments of the earliest Qur'an manuscripts are divided among major museums, libraries and private collections in the Middle East and the West. There are only around thirty eight published fragments of various vertical format codices (fragments consisting of multiple leaves, bifolia, single leaves and parts of leaves). Fragments are held in the Tokapi Saray, Istanbul, British Library and the Khalili Collection, London, The Vatican Library, Rome, The Chester Beatty Library, Dublin, The Russian Academy of Sciences, St. Petersburg and the Khedival Library, Cairo, while single folios are held in the David Collection, Copenhagen, Dar al-Athar al-Islamiyah, Kuwait, Beit al-Qur'an, Bahrain and The Oriental Institute, Chicago. Hijazi leaves were sold in these rooms on 6 October 2010; lot 3, 8 October 2008, lot 3; 23 April 1979, lot 13; Christie's, London 23 April 2015, 3; 7 April 2011, lot 10; 8 April 2008, lot 20; 1 May 2001, lot 12 and Bonhams, London, 11 October 2000, lot 13.