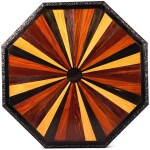 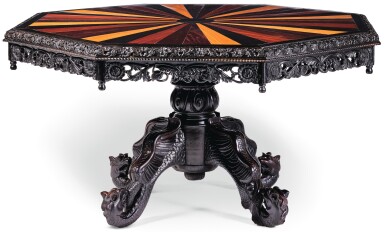 with an octagonal top with a foliate carved edge, inlaid with rays of five specimen exotic woods, on a stylised stem with four undulating supports carved as dragons' scaled bodies and wings terminating in feline heads

In good condition, table top detaches from the body, some hairline cracks to wood on base and small nicks to cover, the table top in good condition, some very slight wear to edges and minor nicks, a small part of resoration to carved border, as viewed.

The Galle District of Ceylon was famous in the nineteenth century for its specimen-wood furniture, remarked upon by a traveller in 1848 who described a tea table as a "fine specimen of the Point-de-Galle inlaid work, on which we are expended the varied beauties of Ceylon`s ninety-nine species of costly wood. The skillful artificers of Galle tempt the traveller with exquisite productions of their art". The woods probably used here include palm, calamander, tamarind, satinwood, jackwood and ebony.

In 1850, H.C. Sirr wrote that in Galle one could find "those exquisite inlaid articles, which far surpass any specimen of Tunbridge ware that has yet been produced-ivory and various coloured native woods are inlaid upon the ebony and as the designs are well defined, the effect produced is magnificent" (see A. Jaffer, Furniture from British India and Ceylon, 2001, p.373, fig.142 for an ebony circular table with a similar specimen-wood design top). Comparables tables were sold in these rooms, 3 May 2018, lot 129; 6 November 2014, lot 249 and 10 July 2013, lot 227.