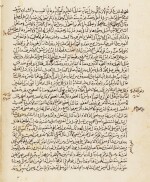 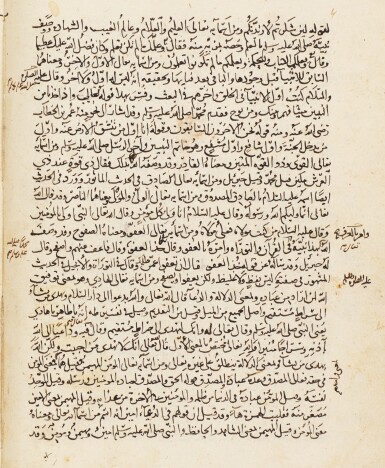 Arabic manuscript on cream polished paper, 139 leaves, 25 lines to the page, written in naskh in black ink, chapter headings picked up in larger bold red thuluth, f.2a with the title written in gold outlined in black, within a gold and blue cartouche with etched ground, in brown leather binding with central stamped medallion

The margins have been cropped and bear commentaries in different hands throughout; minor stains and restorations, some smudges and traces of mold, some restoration to the paper, European numerals marking the pages folios on the upper external corner, as viewed.

The Kitab al-shifa’ fi ta’rif huquq al-Mustafa is a work based on the traditions relating to the prerogatives, the good manners, the miracles, the names, and the divine mission of The Prophet. The text is divided into four qisms, the first and the second of which have four babs each, whilst the third and fourth have only two. The babs are in their turn subdivided into fasls.

This copy is remarkable for two aspects: it seems to be the earliest recorded, dated just four years earlier than the two in the Chester Beatty Library, Dublin (dated respectively 1365 AD and 1366 AD, see U. Lyons, A Handlist of the Arabic Manuscripts, volume VIII, Indexes, Dublin, 1966, p.119). Throughout the manuscripts there are several notes on the margins stating that it was collated against the autograph of the author (see, for example, the notes on ff.85, 89, 113 and 117). For other copies of this work, see the online version of the catalogue.