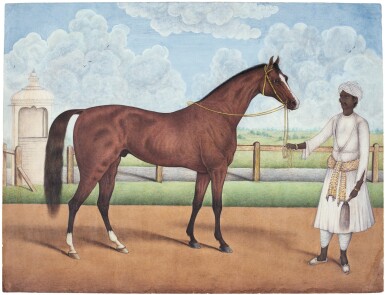 Minor losses and rubbing, as viewed.

The present painting is in the style of an artist who usually signed himself Shaikh Muhammad Amir Artist, Resident of Karaya, a suburb south of Calcutta towards Ballygunge. Shaikh Muhammad’s known works began circa 1828-30 and lasted until the 1840s. He was one of the most prolific and talented artists in Calcutta during this period. He started off his career with his only known major topographical view, one of the Calcutta Esplanade taken from the Maidan (Losty 1990, pl.24). The only other datable work is the dispersed Holroyd Album, an album commissioned by a Calcutta businessman, Thomas Holroyd Esq., of No. 5 Park Street, offered to the Oriental Club in London in 1839. Five paintings from the Album are currently held in the India Office Library (Archer 1972, pp.91-94, col Pl. B and figs.28-30) and in the Victoria and Albert Museum, London (Archer 1992, pp.94-97, nos.80-81). Other examples of his works can be found in Welch 1978, nos.20-24 and Hobhouse 2001, nos.22-25.

Most of Shaikh Muhammad’s paintings are of houses, servants, vehicles, animals - overall, anything that reflected the life and times of British inhabitants of British India's capital. When it comes to paintings of horses, carriages or the racecourse, the artist usually painted the land as flat as possible, with no suggestion of dimpled hills as evidence in this work. Indeed, the present painting’s style differs significantly from Shaikh Muhammad’s signed work whose heavy stippling of human flesh is absent here. The outfit of the groom also slightly differs from what one would expect with his dangling cummerbund. Furthermore, the chowrie (fly-whisk) suggests that the horse might belong to an Indian magnate resident in the city who required the traditional panoply of chowrie and fan when he appeared in public.

Two closely comparable works depicting racehorses with their grooms, both inscribed 'Shekh Mohamud Ameer, Calcutta, at Karyah' were sold in these rooms, 25 May 2005, lots 134 and 135.