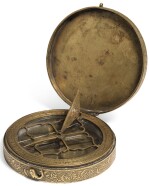 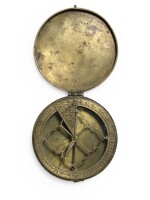 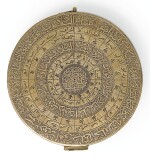 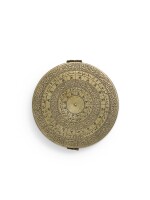 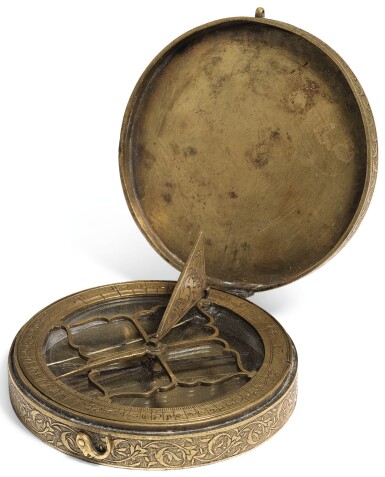 A SAFAVID ENGRAVED QIBLA-INDICATOR WITH COMPASS AND MARKINGS TO MECCA AND MEDINA, SIGNED BY MUHAMMAD KHALIL IBN HASAN 'ALI, PERSIA, DATED 1080 AH/1669 A

A SAFAVID ENGRAVED QIBLA-INDICATOR WITH COMPASS AND MARKINGS TO MECCA AND MEDINA, SIGNED BY MUHAMMAD KHALIL IBN HASAN 'ALI, PERSIA, DATED 1080 AH/1669 A

circular form with hinged lid, incised with inscriptions, some bands with a punched ground, the interior with glass frame and compass below with inscribed names of locations, metal frame above with needle and sundial

The glass with an internal crack, some minor chips in glass loose in bottom section, some oxidisation to brass, as viewed.

The qibla, or sacred direction towards the Ka'aba in Mecca, was particularly researched in Safavid Persia. More treatises on the determination of the qibla were compiled and more instruments for finding the qibla were constructed under the Safavids than in any period of Muslim history. This compass shows the qibla for a few specific cities, including Mecca, Medina and Najaf (For similar examples see D. King, World-Maps, passim, esp. pp.134-8 and 545).

The well-known astrolabe maker Muhammad Khalili ibn Hasan 'Ali was a member of the prolific school of instrument-making that flourished in seventeenth-century Isfahan. He is known by some two dozen astrolabes, including two fine and large examples sold in these rooms, 8 October 2008, lot 169, and 7 October 2015, lot 326.