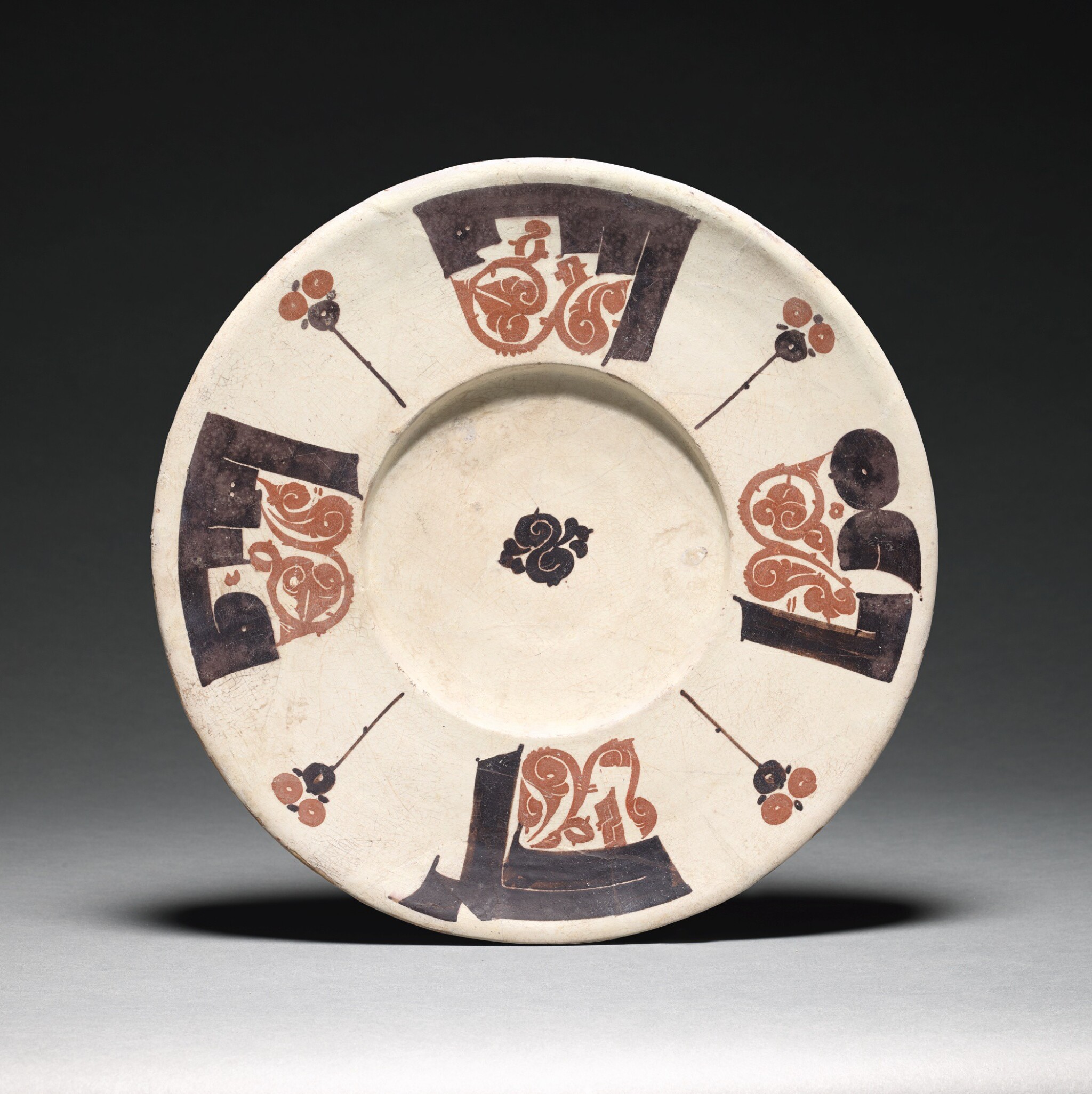 shallow with wide rim on short foot, earthenware decorated in white slip with dark brown and red designs under a transparent glaze

The dish once broken and restored as visible from underside, notably with drill holes for original consolidation staples visible (these are indicative of an early repair), recent retouching carried out by Plowden & Smith, craquelure visible and minor chips to external edge, small amount of infill, as viewed.

‘Eat [what is] in it with enjoyment and fulfilment’

A popular phrase found on slip-painted vessels. The inscriptions on Nishapur or Samarqand dishes such as this are typically proverbial in tone. This one refers to the purpose of the dish. The same aphorism ‘Eat in it with enjoyment and fulfilment’ can be found on the bowl in the al-Sabah collection, Cat. Ga2 suggesting it was a well-loved maxim for such serving dishes. The bold style of the calligraphy and the quartered design resembles Cat. Ga3 of the same collection (Watson 2004, p.208).

The inscriptions were always in Arabic though Persian was the lingua franca of both Nishapur and Samarqand. Simple, elegant radial designs punctuate the inscription. Unlike some slip-painted wares (like Cat. Ga.1 of the al-Sabah Collection) which have individual letters in red to create a visual rhythm to the inscription, this dish uses radial medallions in black and red to split the text into quadrants. ‘The black is used almost exclusively for the Kufic inscriptions’ (Wilkinson 1987, p.181). The completeness of this dish is one aspect of its beauty. Most of excavations in the 1930s and 1940s that revealed these slip-painted wares found copious sherds or wasters.

Tablewaressuch as this were made by a potter who coated the red clay of the dish with a thin layer of pure white clay known as ‘slip’. Ornamental Arabic calligraphy was subsequently painted around the rim of the dish or often in a single line across the centre. Oliver Watson describes eastern Iranian slip-painted wares as, at their best, ‘some of the most impressive ceramics ever made in the Islamic world. Of the simplest materials, they are most beautifully made – enormous bowls, precisely thrown and turned to a thinness rarely matched elsewhere in earthenwares, with a purity of colour and texture of slip and glaze, and a ringing tautness when fired; they are breathtaking to handle’ (Watson 2004, p.205) Politically and economically ‘Samarkand and Nishapur were both flourishing cities during the ninth and tenth centuries and, despite various upheavals, were still of great importance in the two following centuries’ (Wilkinson 1970, p.105).

Charles Wilkinson suggested that they were possibly used for pistachio nuts and sweetmeats (Wilkinson 1987, p.106) later reiterated by Watson who states that the "many inscriptions allude to faith, generosity and noble qualities, often in a context of food or eating – one indication that they were a tableware, not just decorative ‘conversation pieces’ "(Watson 2004, p.206). This dish seems to corroborate Wilkinson’s hypothesis.