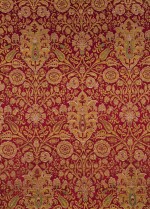 Mounted on modern frame, good condition, some fraying to gilt textiles, some tears with associated restoration notably to horizontal centre, lower right-hand centre corners and angles, edges with some dark discoloration and wear, as viewed.

Valuable textiles and garments made of luxury materials such as this formed an essential part of Ottoman ceremonies such as the accession of sultans, parades, the ceremony of the girding of the sword (kiliç kuşanma) and receptions. They appeared in the forms of banners, costumes, curtains, wall-hangings and ground-coverings which lent visual magnificence to processions and receptions and as ‘robes of honour’ (hil’at) bestowed on foreign diplomats and court servants. Such textiles of high symbolic importance served to represent the Sultan’s generosity and power. Indeed, high Ottoman officials would kiss the hem of the Sultan’s garment. Turkish and foreign patrons have collected and treasured these as symbols of power and prestige for centuries.

This superb brocaded silk consists of a floral decoration in a pattern of roses, carnations, palmettes and other types of flowers, which also formed the basis of inspiration for Iznik ceramics. Such aesthetics are typical of the so-called Classical Ottoman style, formed by the great court illuminator Kara Memi, which mainly consists of ogival patterns with floral sprays and saz leaves. This silk brocade is almost identical to an Ottoman kemha that is currently held in the Historical Museum in Stockholm (inv.no. 113), illustrated in Atasoy 2001, p.248. The kemha, part of the Royal Collection, was used to cover the ‘violet bed’ in the Swedish royal household. It contains the initials of Queen Hedvig Eleanora (r.1654-60).

Ceremonial kaftans and other garments can be found in the collection of the Topkapi Palace Museum in Istanbul. A miniature painting from Talikizade’s Eğri Fetihnamesi, reproduced here (fig.1), depicts Sultan Mehmed III returning from the Eger campaign to an opulent victory parade. The illustration demonstrates how these textiles were used to create a dramatic visual stage (Topkapi Palace Museum Library, inv.no. MS.H.1609, folios 68b-69a, illustrated in Atasoy 2001, pp.25-28). The many vibrant silk panels lining the perimeter of the scene resemble the present textile, and it is worth noting the thin border strips which can also be found on the kemha to hand. A further tall kemha panel, from the collection of Argine Benaki Salvago, was sold in these rooms, 26 April 2017, lot 142.

This Ottoman brocaded silk, in almost pristine condition and with a distinguished provenance, displays the magnificent workmanship and historic ceremonial significance of Ottoman courtly textiles.