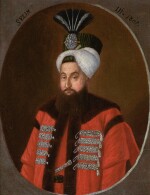 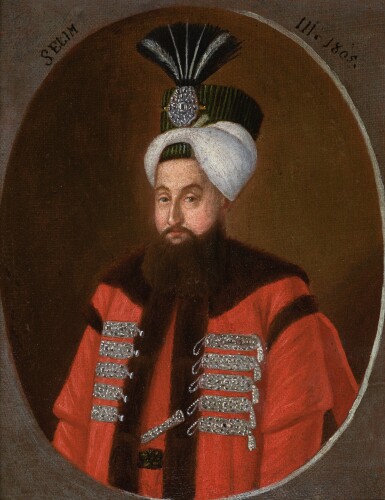 The canvas has been re-stretched, minor losses to the paint, minor holes and crackeleure , as viewed.

The present portrait, dating from 1805, is attributed to Konstantin Kapidagli, one of the earliest Greek-Ottoman court artists painting life in the Ottoman court between 1789 and 1806. Kapidagli is renowned for his set of portraits of Ottoman Sultans, known as the Kapidagli Series, which were produced between 1804 and 1806. He was an expert in realistic portraiture, a method not practised in the Ottoman world until the late eighteenth century.

Sultan Selim III, the 28th Sultan of the Ottoman Empire was in power from 1789 to 1807. One of the first Ottoman representational paintings by Kapidagli is Sultan Selim III Enthroned at a Holiday Ceremony. Kapidagli was commissioned by Sultan Selim III himself to produce engravings of other Ottoman Sultans. However, the commission was cancelled with Sultan Selim’s deposition in 1807. John Young continued the project of publishing the series in 1815, during the reign of Sultan Mahmud II. He named it Series of Portraits of the Emperors of Turkey.

A document (inv.no. TSM 570/2) held in the Topkapi Palace archives states that Sultan Selim III would commission his own portraits in order to gift them to European ambassadors and monarchs. Selim III was a forward-looking Sultan with the aim of solidifying ties with Europe. This painting is likely to have been produced for this intention and offered as a diplomatic gift. Known as the reform-minded Sultan, Selim III was deposed in 1807 by the Janissaries, the Ottoman Empire’s elite infantry unit. He was murdered the following year as he was accused of not respecting Islamic and Ottoman traditions.

This portrait and others of Sultan Selim III are important due to their realism. This style was further adopted by nineteenth century painters, and such realist imperial portraits continued to be produced until the end of the Ottoman Empire. These portraits are now kept in the Topkapi Palace Museum in Istanbul. A near-identical painting of Sultan Selim III (inv.no. A3689) by Kapidagli is currently held in Topkapi Saray (see Raby 2000, p.473).