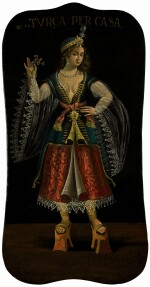 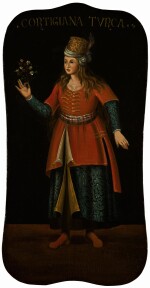 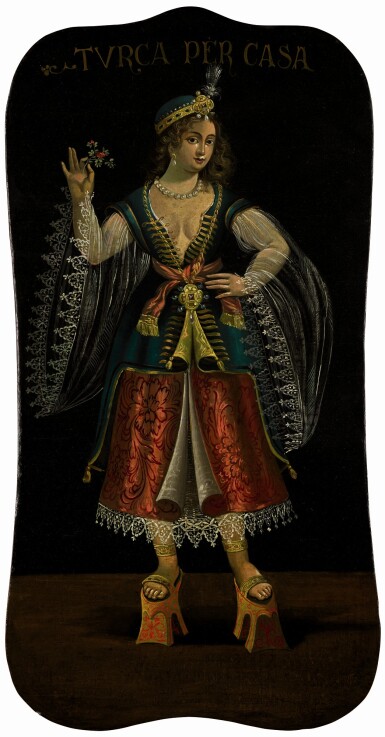 Each panel laid on a velvet surface, some crackleure throughout and minor losses to the paint, as viewed.

The painting with the title ‘Turca per Casa’, which translates to ‘Turkish woman around the house’ depicts an Ottoman lady wearing a kaftan (silk robe) and nalins (shoes worn in hammams), holding a flower. The second painting represents a Turkish Courtesan, who also wears characteristic headgear and a silk robe.

A comparable piece to the ‘Turca per Casa’ painting is illustrated in Williams 2014, p.21. The lady in this painting, defined as a ‘nice Turkish woman’ also wears a kaftan and nalins. ‘Turquerie’ refers to a European fashion inspired by the Ottoman Turks, and is represented in various forms of art. Paintings that belong to this style, popular in the eighteenth century, document the interest amongst the European elite in the daily life of the Ottomans and the fashionable clothes and other accoutrements worn in the palaces of Constantinople.

The Rijksmuseum in Amsterdam owns two very closely related paintings by Vanmour which can be found in Irepoğlu et al., 2003, pp.161, 230.