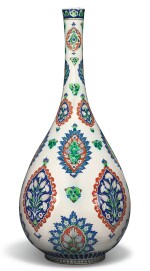 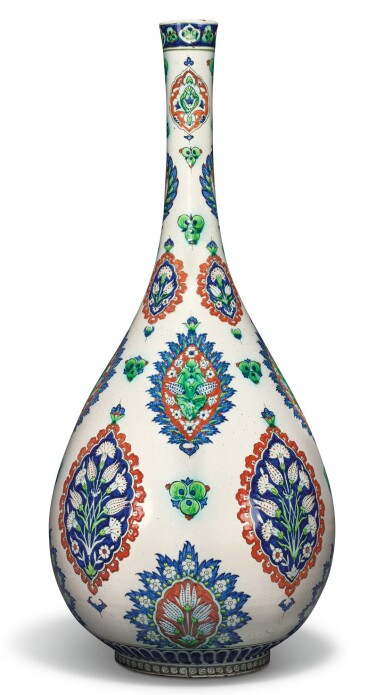 Intact, pitting to glaze and notably to red with some red-retouching / painted in some, drill hole to foot with associated break and another drill hole to underside of base, as viewed.

This lot should have a Warehouse symbol in the printed catalogue. The item can be collected from Greenford Park Warehouse after purchase.

Cantagalli works originate from a pottery factory founded by Ulisse Cantagalli in Florence in 1878. Ulisse began to trade as Manifattura Figli di Giuseppe Cantagalli, with the main production of works being copies of Italian maiolica as well as European and Middle Eastern pottery, and specifically Iznik wares from the Ottoman Empire.

Cantagalli vases such as this one, which can be identified by the signature cockerel mark on the base of the vase, are inspired by sixteenth century Iznik ceramics. The Italian producers did not want the vase to be a complete imitation of Iznik, and this can be distinguished by its monumental size and form, which differs from typical Iznik works.