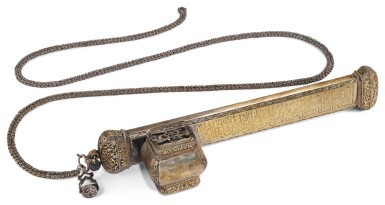 the elongated rectangular case with bulbous terminals and well with hinged openwork cover, the terminals and edges and base of well with incised floral decoration, two sides of the side incised with inscriptions, loop with attached chain and three-sided seal

The surface with some abrasion and nicks and rubbing, minor knocks and dents as consistent with age, the interior with minor encrustation, scratches, as viewed.

On one side: Qur'an, surah al-Fatihah (I)

On the other side: 'The Sultan son of Sultan, Sultan Mustafa Khan son of 'Abd al-Hamid Khan, may God make his empire eternal and his reign everlasting up to the end of time' In the three-sided seals:

Arabic calligraphy, in the language of the Qur’an, was of central importance to Muslims as they tried to find a way to capture the spiritual beauty of the religion and the sacred book (Derman 1998, p.4). With the conquest of Constantinople in 1453 by Sultan Mehmed II ('the conqueror), Ottoman calligraphers advanced the practice of their art, changing the shape of the letters and re-configuring the internal geometry of words and letters. Sheikh Hamdullah (1429-1520) was the first great Ottoman calligrapher, whilst Ismail al-Zuhdi (1806) and his brother Mustafa Rakim (1758-1826) were two other important calligraphers. Each of these scribes was renowned for developing his own unique style. The main use of calligraphy, before the advent of the printing press, was to make copies of the Qu’ran and produce pious inscriptions for sacred buildings, whereas literary or scientific works were a secondary concern. Thus, many calligraphers earned their living through the copying of the Qu’ran.

To become a calligrapher, it was essential to start from childhood and begin studies in elementary school. This way, masters could determine whether a child had a talent from an early age. Master calligraphers either gave private lessons or lessons in institutes to train younger talents. The specialised knowledge that was needed to become a calligrapher was "imparted personally from master to apprentice as part of the chain of transmission that connected successive generations of calligraphers" (McWilliams & Roxburgh 2007, p.10).

Ottoman calligraphers paid particular attention and importance to the tools and materials employed in calligraphy. As Derman notes, "in the Ottoman period, artisans lavished more care and attention on these tools than on the tools of other trades, creating objects of great beauty" which are now of museum quality (Derman 1998, p.7). Essential tools included the blade (known as the tig), usually made of valuable materials such as enamelled gold, mother-of-pearl, gold-inlaid steel, ivory, coral or ebony; scissors; penknifes of different sizes to cut the pen; a script; rihdan (container for rih powder); and finally the pen-case.

Pen-cases come in two forms, either with an inkwell at one end, known as divit, such as the present one, or in a rectangular or cylindrical box known as qalamdan. Other comparative pen-cases are currently preserved in the Turkish and Islamic Arts Museum, Istanbul (inv.nos. 4038 and 4040, see G. Kurkman, Osmanli Gümüş Damgalari, 1996, p.163. Another similar pen-case is in the Nasser D. Khalili Collection, London (see Rogers 1995, p.170).