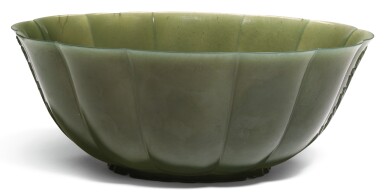 the nephrite jade carved as a polylobed deep bowl on a detailed petalled base with chrysanthum flowerhead, two stylised acanthus leaves emerging at each end

Jade bowls with a natural curving body such as this one are typical of Mughal jades of the seventeenth century. “The Mughal love of natural forms marked by soft, curving lines – as opposed to the straighter and stiffer elements of the Timurid and Chinese traditions challenged Indian carvers to reach great heights in applying their technical prowess to this unyielding hardstone” (Haidar and Stewart 2015, p.20). Nephrite jade occurs in a range of colours, from a dense, dark green, almost black, to lighter shades of green to almost pale, luminescent white (ibid, p.25). It is also a material famous for its extreme resistance, which requires patience and skill to work. The interest in jade in the Mughal Empire emerged from its Timurid ancestors, and possibly also from European lapidaries in the Mughal court (ibid, p.25).

This jade bowl can be admired for its elegant form, and belongs to a group of plain, Mughal carved jade pieces most probably intended as dining vessels. For example, a folio from the Baburnameh, showing Babur entertained by Badi-uz-Zaman-Mirza in the Jahan Ara Garden in Herat, attributed to circa 1593, depicts a banqueting scene in which green dishes of various shapes are used to serve food (see S.Markel, 'Inception and Maturation in Mughal Jades', in The World of Jade, 1992, p.51). Similar jade bowls were sold in these rooms, 8 October 2014, lot 224 and 1 May 2019, lot 168.