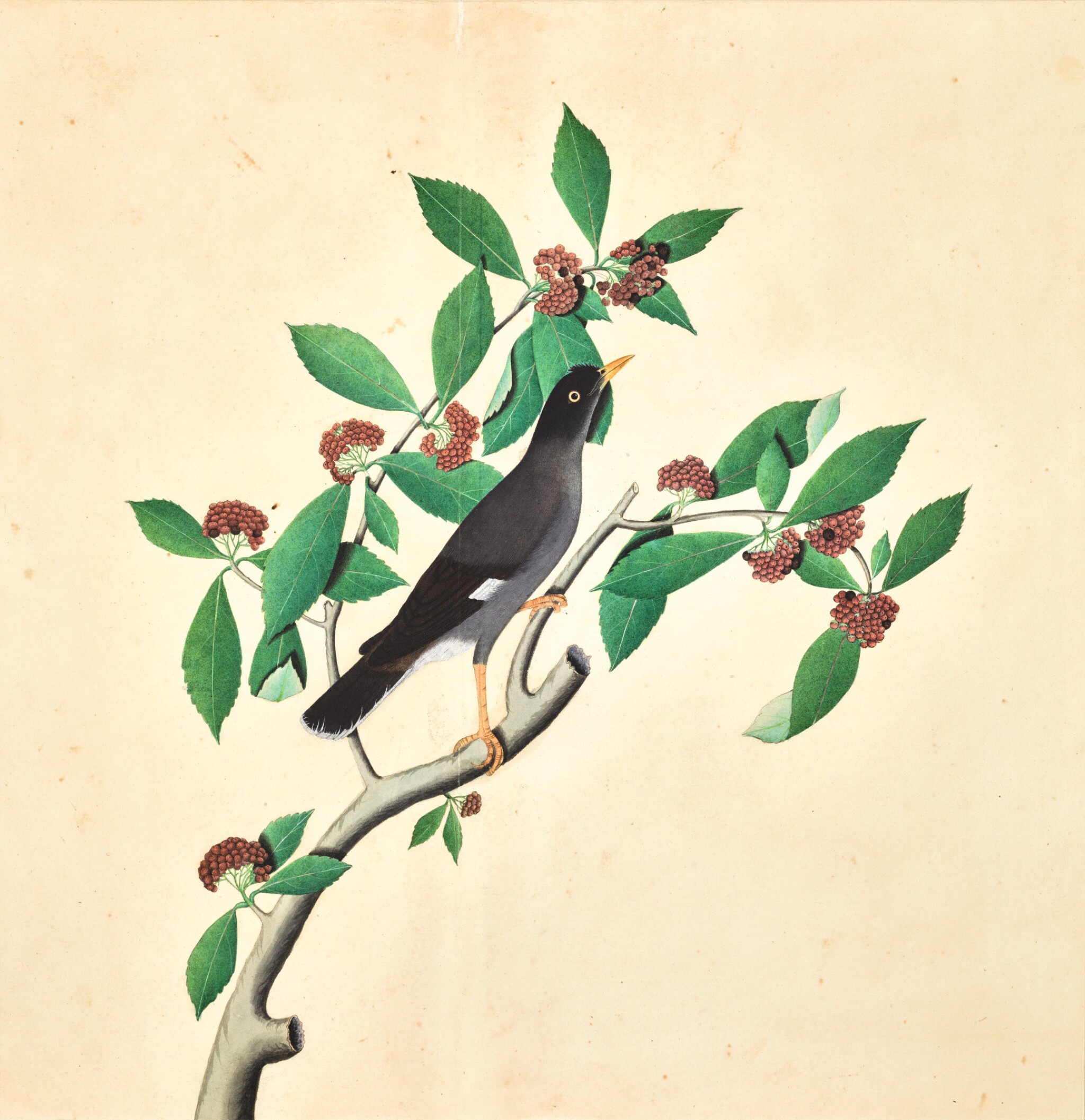 A crease runs in the middle of the painting, various stains, the drawing has been laid down on carton, whose border are slightly restored, the signature and inscription detatched from the painting and in a separate folder, as viewed.

This study of a Jungle Myna bird is from the great series of bird and animal illustrations painted for Sir Eljiah and Lady Impey between 1777 and 1783, the earliest and without doubt the finest of the natural history series made for the British in India.

Sir Elijah Impey was appointed the first Chief Justice of Bengal in 1774, taking his wife and household with him. Lady Impey developed an interest in the flora and fauna of India and South East Asia and set about collecting animals and birds in the large park attached to their house in Calcutta. From 1777 she employed Shaykh Zayn al-Din, an artist from Patna, to record the various animals and birds in a naturalistic manner. By 1780 the project had grown and Lady Impey employed two further artists, Bhawani Das and Ram Das. In 1783 Sir Elijah was recalled to London, by which time over 326 illustrations had been completed. After Sir Elijah's death in 1809, the collection was sold by Phillips of New Bond Street.

The present bird can be identified as a Jungle Myna (Acridotheres fuscus), a resident of South Asia whose habitat extends from the Himalayas south to Bengal, Bangladesh and the eastern and south-western coastal areas of India. Jungle Mynas inhabit wooded and cultivated areas. They are omnivorous, feeding on insects, seeds and fruit. The plant can be identified as a Callicarpa or Lantana.

A study of the same bird and plant was painted for Lady Impey by Zayn al-Din in 1778, the same year as the present version. It was subsequently in the collection of the Linnean Society of London and was sold in these rooms 10 June 1963, lot 54. It is possible that the present example is actually the same painting that was in the Linnean Society, or that it is another version of the same bird painted by Zayn al-Din for Lady Impey, a practise that is known to have occurred (there are at least two versions of the Satyr Tragopan and the Painted Stork).

Other examples from the Impey series are in the Victoria and Albert Museum, London, the Radcliffe Science Library, Oxford, the David Collection, Copenhagen, the Metropolitan Museum of Art, the Los Angeles County Museum of Art and the Yale Center for British Art.