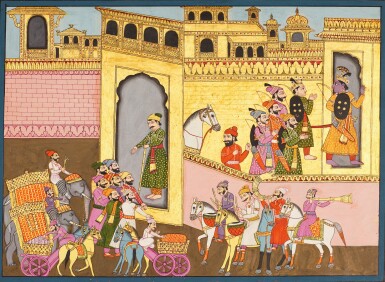 gouache heightened with gold on paper

Some rubbing and stains, minor losses to the paint, minor holes, as viewed.

Acquired from the Royal Mandi Library in 1969.

The present illustrations relate the story of the union of Krishna with his principal consort Rukmini.

Rukmini was due to wed the powerful King Sisupala but had given her heart to Krishna. As her wedding approached she sent an entreaty to Krishna to act soon. Krishna set off to rescue her and abducted her as she was leaving a temple after prayers. As soon as this news reached Rukmini's brother Rukma, who had sworn enmity with Krishna, he immediately set off after the pair vowing to put an end to Krishna's life. In the ensuing struggle Krishna easily vanquished Rukma but spared his life upon Rukmini's pleas. However he shaved Rukma's head to remind him forever of his defeat and the shamed Rukma turned back home.

In the meantime, Krishna's devoted elder brother Balarama, who had learnt of Krishna's hurried departure, followed his brother's footsteps with an army as he knew Sisupala would be bent on revenge as soon as he received news of the abduction of his betrothed. As he had expected, Sisupala amassed a huge force and the two sides fought a pitched battle where Balarama ultimately emerged victorious. The two brothers brought Rukmini home to Dwaraka in triumph where the wedding of Krishna and Rukmini was celebrated with pomp.

The illustrations follow the story closely and render each scene in great detail, including the bloody and climactic battle.