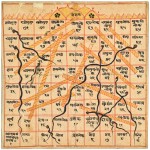 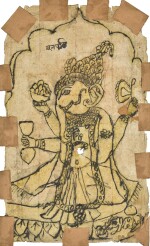 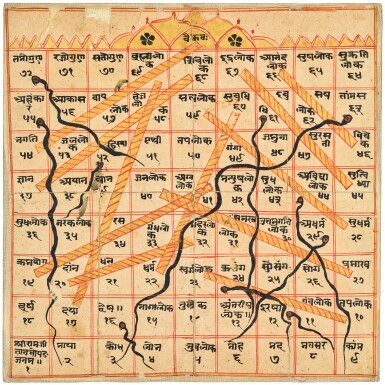 ink and opaque watercolour on paper

Some mounted on buff paper, some restorations, one with cello tape as illustrated on the image online, some stains and smudges, as viewed.

D. Hanuman drawn with yantras. Rama's name and and other mantras, Rajasthan, 19th century. This devotional image of Hanuman would have been used as a visual tool for meditation. Created by a devotee rather than a professional artist, this image is a fragment of larger full-figured Hanuman(pataka). The five animal heads (panchamukhi) emanating from his head are representations of Vishnu's incarnations and his vehicle. Representations of panchamukhi became popular in Rajasthan during the eighteenth century and were typically depicted with larger heads on either side of the monkey's face. In the present drawing, the name of Rama is used in repetition to form Hanuman's tongue, necklace and waistband.