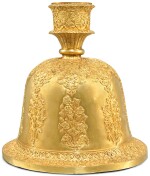 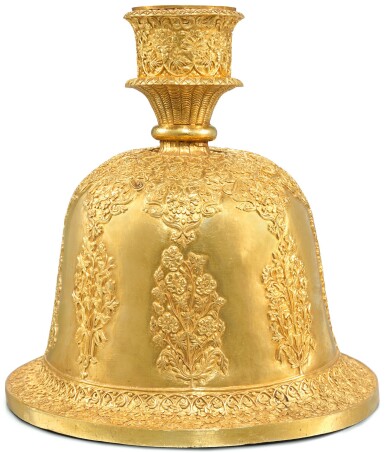 of typical form, raised from sheet gold, hammered in relief and chased, with stylised palmettes, lotus blossoms and birds, the underside pricked in Devanagari script with date and weight

In general good condition, a dent to the base and slight dent to mouthpiece recently restored by Plowden & Smith, very slight scratches as consistent with age and use, as viewed.

'3 Bhadra 94' - In the Vikrama Samvat, the month of Bhadra falls between August and

This bell-shaped gold huqqa base is one of the four component parts of a huqqa and most likely originates from Kutch, a district of the Gujarat state of Western India. Water pipes emerged during the Safavid dynasty, and tobacco was first brought to India in 1604 through the Portuguese and the Mughal ambassador Asad Beg, on a visit to the court of Bijapur, although the earliest forms resembling huqqas appeared as early as the ninth and tenth centuries.

In India, the huqqa was considered an object of high status, and by the end of the seventeenth century, it was a recurring motif in the court portraiture of the Rajputs, Mughals and the Paharis. Mughal Emperors would be painted smoking a huqqa, as can be seen in a painting of Raja Indra Dev (r. circa 1730-60) sold in these rooms, 24 October 2017, lot 111. This piece is comparable to a huqqa base in the al-Sabah collection, dated to the late sixteenth/early seventeenth century (Keene 2001, p.45, no.3.2).