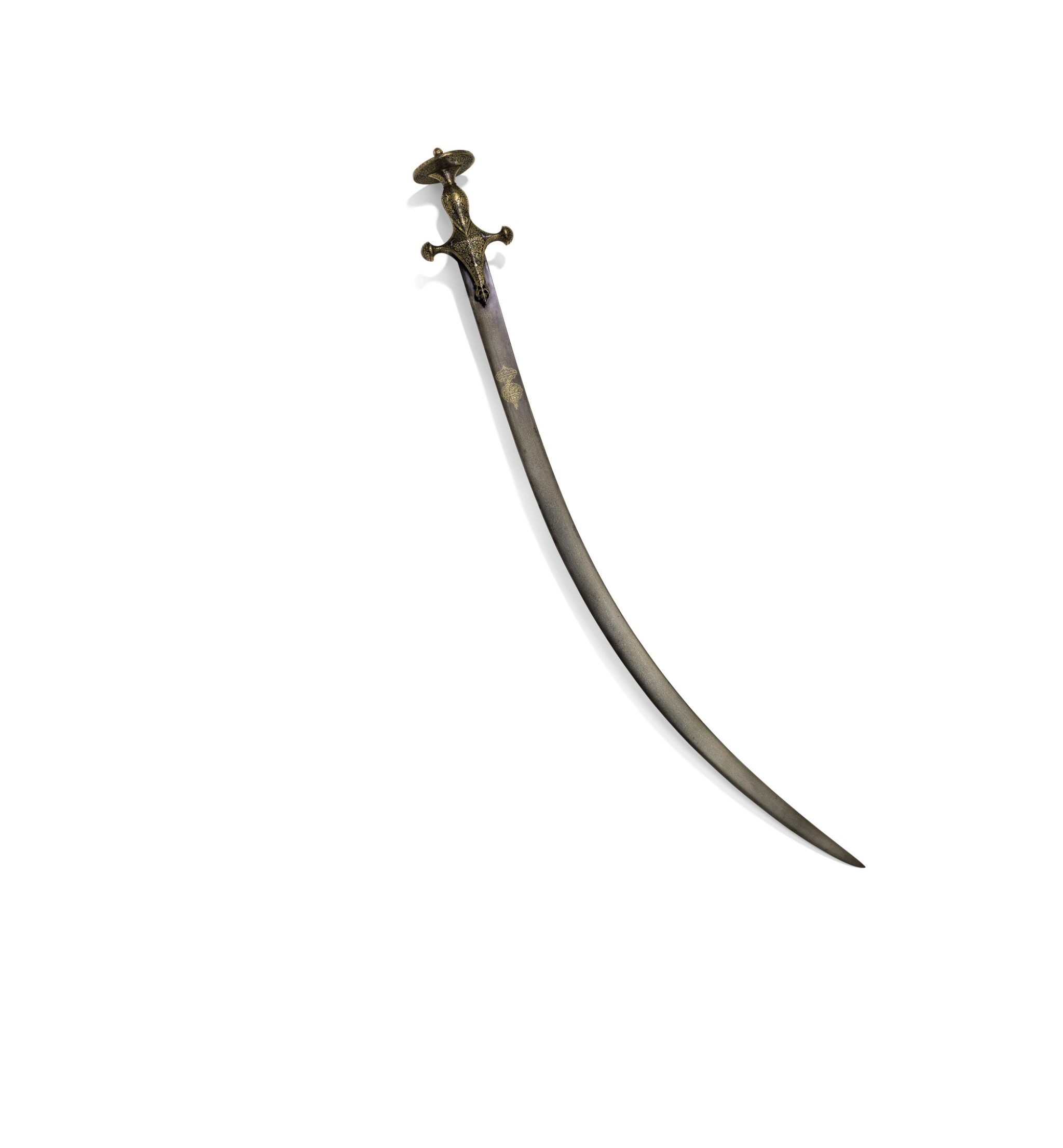 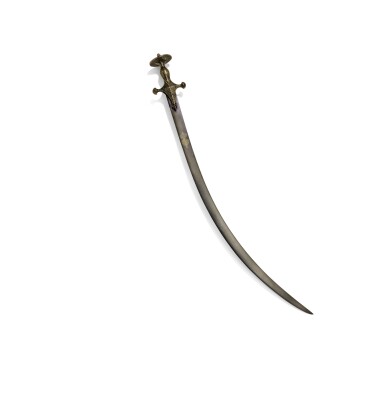 the steel hilt with baluster grip, broad crossguard, elongated forte and disc pommel, profusely decorated in gold and inlay of two colours, hightened in silver, with rich design of birds within a floral setting, with long watered steel single-edged blade, inlaid with calligraphic cartouches near forte and back edge

The hilt in good condition, some minor rubbing to gold and silver overlaid decoration, the sword with some patches of oxidisation, notably to fitting between blade and chape, as viewed.

A Persian poem on the edge of the blade: 'Help from Allah and a swift victory/ I have procured this sword for the sake of shedding blood/ by means of the cutting sword I will bring defeat to my enemy/ this heroic sword of mine can split a running elephant/ by striking with my blood thirsty sword I will tame my enemy'

This sword marries a hilt of extreme high quality inlaid in both silver and gold using the ‘Tah-Nishan’ technique with a finely watered steel blade signed by 'Asadullah Isfahani. Based upon comparison with swords with similar high quality decoration, it can be deduced that the name inscribed on the present example must refer to the prominent and powerful general Nawab Mirza Najaf Khan from the Mughal army under Emperor Shah Alam II, who was widely known by this title during the latter part of his career (and in posthumous historical accounts).

Born into the Royal Safavid line in Isfahan in 1723, Mirza Najaf Khan and his sister moved to India where he begun a distinguished military career in which his strategies in warfare led him to many victories. He was appointed 'Amiru'l-Umara, 'Premier Noble', and was bestowed the official title 'Zu'lfaqar al-Dawlah, 'Sword of State', after recovering the city of Agra from the Jats in 1771 (Keene 1894). It is most probably after this date, when Mirza Najaf Khan became well-known, addressed and recorded as Zu'lfaqar al-Dawlah, and before his death in 1782, that this sword dates.

A close comparison with a sword in the Royal Collection, inv.no. RCIN 11238, attributed to Bakhtawar Singh of Alwar, 1779-1815, further confirms this suggested dating (Meghani 2017, pp.154-5). Both swords feature hilts with the same bordering, a flowerhead between paired hachured brackets, confirming the same workshop production although the present example is more elaborate. The abundance of foliage and animals is close to a Mughal sword illustrated in Hales 2013, p.164 with a blade dated 1046 AH/1636-7 AD. A third sword, in a private collection, inscribed to the Mughal Emperor Awrangzeb is illustrated in Elgood 2017, vol.II, pp.614-5.

The watered steel 'wootz' blade of the present sword deserves special mention, as it was made by a master craftsman who signed with the nisba Isfahani, the birthplace of Mirza Najaf Khan and the hereditary seat of the Safavid royal line.