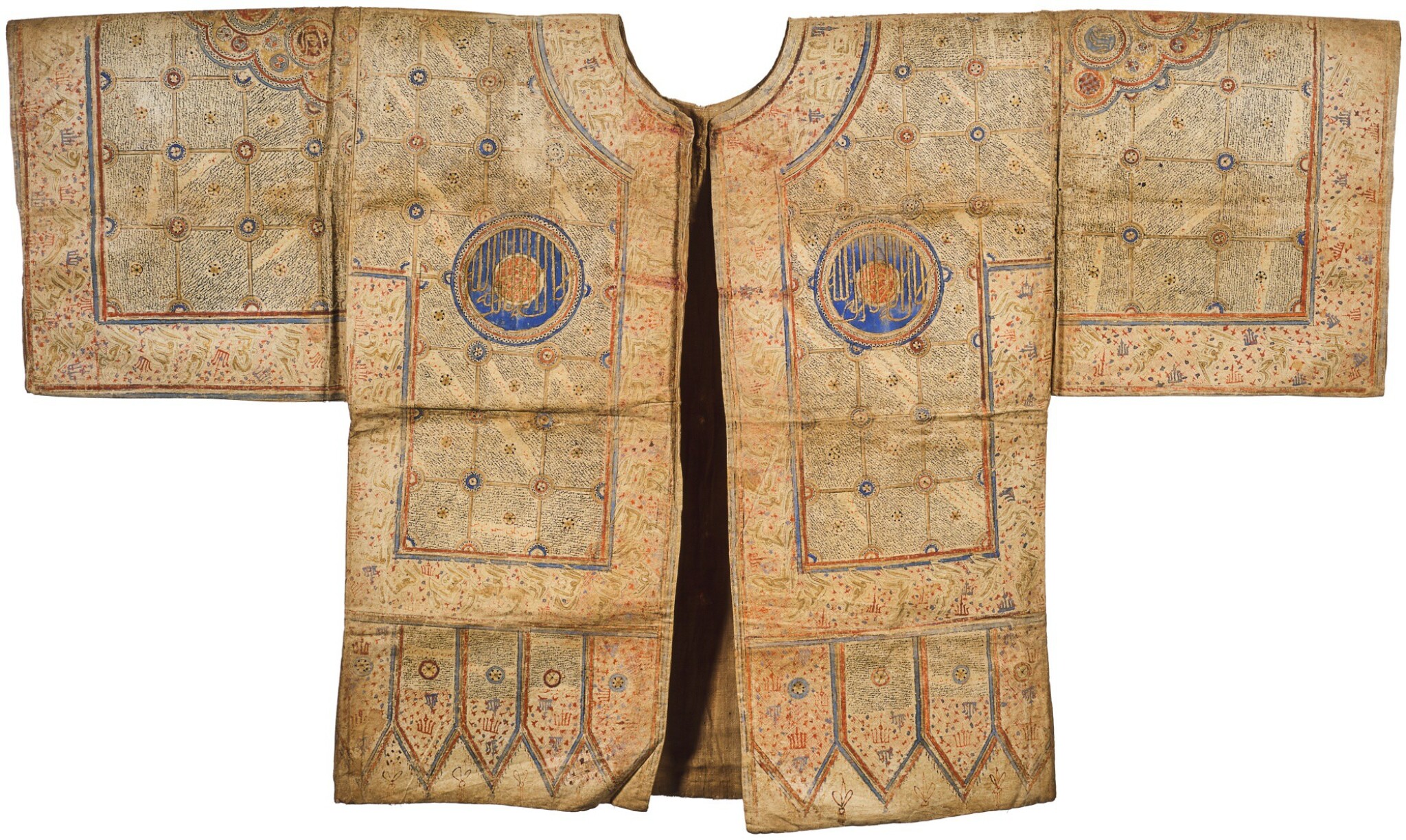 waxed cotton, entirely covered with extracts from the Qur'an, the main text written in Ghubar script in black ink in rectangular compartments with ruled gold, red and blue borders and blue and red roundels at each corner, the front with two large roundels containing the Shahadah written in tall gold on a blue and red ground, external borders with further calligraphy in gold on a red hatched ground, bottom with triangular terminals containing further calligraphy, reverse with a large calligraphic oval on similar calligraphic squares, sleeves with roundels, plain interior

This rare talismanic Qur'an shirt (jama) belongs to a small corpus of surviving clothing from the Islamic world imbued with sacred energy serving both protective and ceremonial purposes.

The belief in the power of talismans is closely linked to the Qur’an, the word of God, and as such, works of art imbued with talismanic properties were often covered with Qur'anic verses. It follows that analogous examples to the present lot must be drawn from Qur'an manuscripts produced during the late fourteenth and fifteenth century in India under the Sultanate dynasties. A particularly close comparison can be made with a Qur'an scroll datable to circa 1395, sold in these rooms 15 October 1998, lot 15. The palette, decorative scheme and scripts used on that piece were extremely close to the present one, notably the large, blue-ground roundels with elongated vertical script. However, the dating of talismanic Qur'an jamas from India is not straightforward, for while the style of Qur'an manuscripts changed quite radically with the dawn of the Mughal period to a more Persian-influenced style, the design of talismanic jamas seems to have continued in a similar Sultanate style for several centuries. An almost identical talismanic shirt, published in 1400 Years of Islamic Art, 1981, no.164 and sold in these rooms, 5 October 2010, A Princely Collection: Treasures from The Islamic World, lot 42, features the same layout, colour scheme and written details, only with slight variations at the terminals.

For further reading on the power of talismans in the Islamic world, see F. Leoni (ed.), Power and Protection: Islamic Art and the Supernatural, Ashmolean Museum, Oxford, 2016.