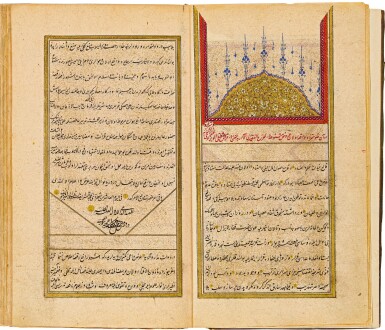 The margins clean, some losses and rubbing, minor stains, as viewed.

This compendium of different texts was assembled in the late eighteenth or early nineteenth century. The first section includes a compilation of reports and petitions sent by Dervish Mustafa mostly to the imperial administration in Istanbul. The earliest is dated 12 Shawwal 1126 AH (21 October 1714 AD) while he was serving in an unknown capacity in Inegöl. The latest is dated 15 Muharram 1147 AH (17 June 1734 AD) while he was serving as qadi in Ahyuli (Pomorie in Bulgaria). Most of the reports and petitions, however, date from his period as qadi of Eğriboz (Chalcis on Euboea (Evia) in the years 1143-44 AH. He also appears to have served as a secretary (katib) in Manisa. There are also two calligraphic exercises signed by Dervish Mustafa al-Vizevi and copied in 1146 AH/1733-34 AD and 1147 AH/1734-35 AD. Dervish Mustafa Vizevi was an official in the Ottoman administration who held various posts in the first half of the eighteenth century. Judging by the two calligraphic specimens, he was also a highly accomplished calligrapher. It is possible that he is to be identified with the Mustafa Vizevi who is recorded as having come from a distinguished family of judges and who studied taliq with Arif Efendi. He is said to have died in c.1737-38 and was buried in Edirnekapi (see Müstakimzade Süleyman Sadeddin Efendi, Tuhfe-i Hattatin, ed. İbnülemin Mahmud Kemal İnal (Istanbul, 1928), p.746).

Also included in the compendium: a poetic translation of the Forty Hadith by Okucuzade Mehmed Shahi's (d.1630). A lexicon of words giving Turkish, Arabic and Persian equivalents. Some verses from Sa'di's Gulistan, as well as a copy of a letter by the Shaykh al-Islam Mirzazade Sheykh Mehmed Efendi to Nevshehirli Damad Ibrahim Pasha (murdered in 1730) on the occasion of the return of the latter to Edirne following a campaign. A selection of Qur'anic verses including 3:154, 17:82, 48:29, followed by a note saying that they were written by Mustafa the mufti in Vize, known as Kara Mufti, and giving his son Dervish Mustafa permission to write them as a cure for headaches and various illnesses; some letters from Tevfik Efendi, the na’ib (deputy) of Rodosçuk (Tekirdağ) to a patron dated 1168 AH/1754-55 AD; and some prayers on the authority of al-Ghazali.