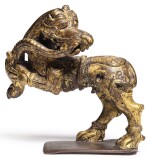 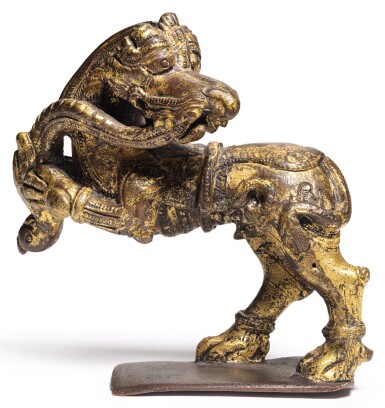 cast and chased bronze gilt sculpture portraying a yali (horned lion) grasping a simurgh (phoenix) in its jaws, standing on a rectangular platform

Most of the gilding rubbed, the surface with some abrasion as consistent with age and use, the platform on which the sculpture stands with some slight dents, as viewed.

The present lot is part of a wider corpus of metal zoomorphic objects from the Deccan. This sculpture is comparable to that published in Haidar and Sardar 2015, p.206, cat.no. 99. Haidar and Sardar, following Mark Zebrowski, attributed the piece to Golconda due to postural parallels with contemporaneous depictions of animals in combat, specifically the yali with one raised paw and elephant with a rearing trunk on a relief wall carving near the Patancheru Gate (Darwaza) of circa 1559 in Golconda. Another granite relief from this monument is illustrated in Zebrowski 1997, p.103, p.112. The yali motif is not restricted to Golconda but seen throughout the Deccan, as evidenced by the plaster wall relief of a yali with one raised paw in a sixteenth-century plaster architectural frieze shown by Zebrowksi 1997 on p.103, pl.108.