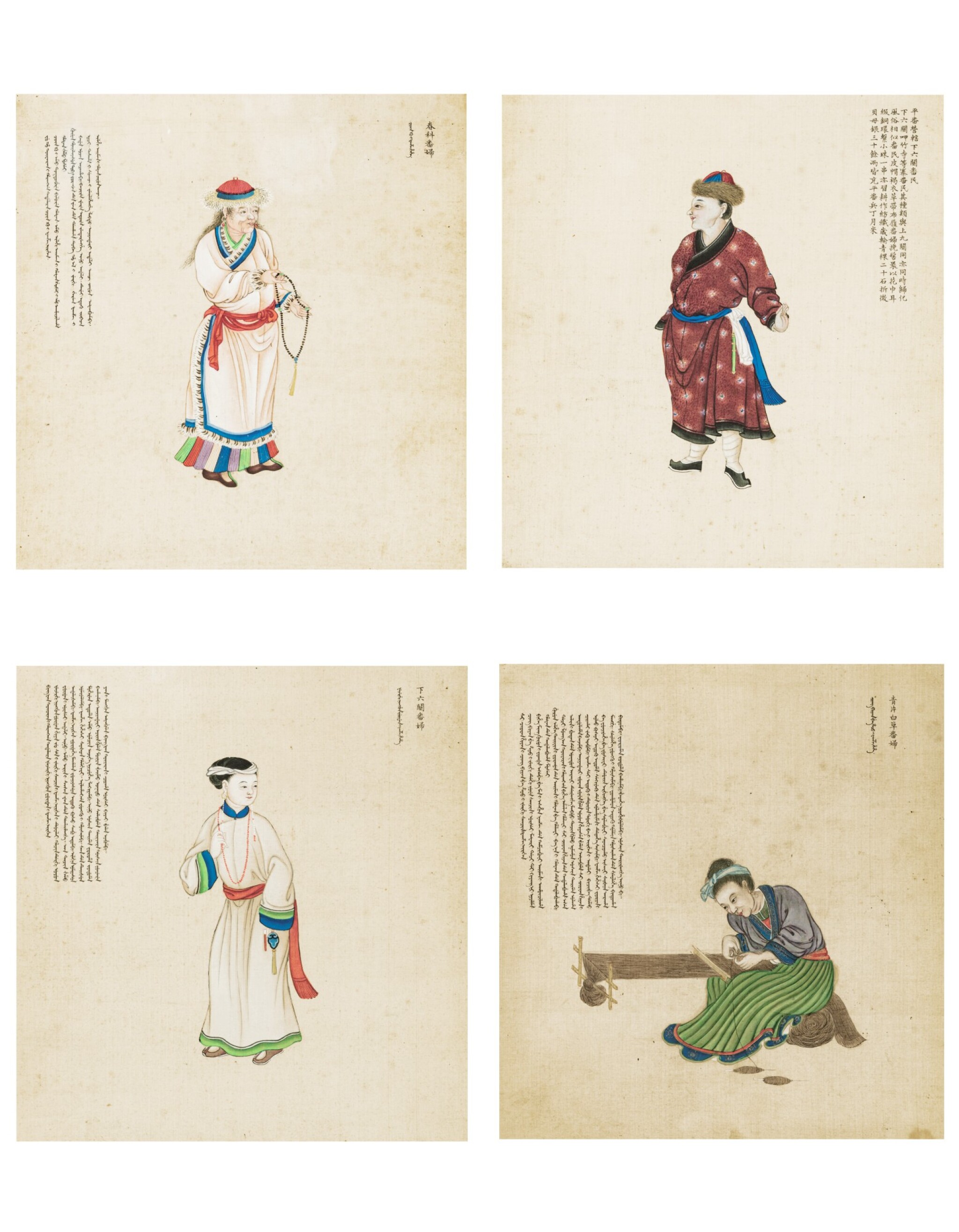 Ink and colour on silk, illustrating one man and three women representing four of the 58 minority groups in Gansu and Sichuan

There is minor discoloration and foxing to all four paintings and scattered stains, small tears and losses to the edges of the silk backing. There is also additional foxing to the back of each.

The Huang Qing Zhigong tu is a monumental compilation in pictures and text on the historical backgrounds, geographical locations. products. dining habits. costume designs and local customs of the 27 countries which held diplomatic relations with the Qing court under the Kangxi emperor. Compiled between 1750 and 1761, it comprised three parts and included the illustrated volumes, the written volumes and the printed volumes.

The four illustrations in the present lot are painted on silk, and mounted on paper and silk. Each leaf depicts a single figure including three women and a man accompanied by an inscription in either Chinese or Manchu. The complete printed part of the Zhigong tu allows us to attribute these four leaves to volume six of the Zhigong tu (Zhigong tu liu ce) which relates to the thirdjuan of the handscroll in the Palace Museum, Beijing. The particular subject of this scroll is devoted to the minority tribes of Gansu and Sichuan and contains a total of 58 illustrations corresponding to the 58 minority tribes. The album of illustrations offered in 2006 in Sotheby's Hong Kong is the incomplete volume six (Zhigong tu liu ce) and contains 52 pages depicting figures from the minority tribes of Gansu and Sichuan. As the album offered in Sotheby's Hong Kong was incomplete comprising 20 double pages featuring a man and a woman from 20 tribes and a further 12 pages revealing either a man or a woman, we can assume that the four album leaves offered here are among the missing eight illustrations from the same album.

These four illustrations from Zhigong tu liu ce are a rare and important discovery. As noted by Nie Chongzheng in his introduction to the album offered in Sotheby's Hong Kong in 2006, 'the French album (Zhigong tu liu ce) (from which these four illustrations are taken) is invaluable as it is the earliest known edition: the production of the Tibutes first commenced in the Sichuan Province. In the 8th month of Qianlong 15th year (1750), the emperor ordered the Sichuan governor-general to submit descriptive drawings of certain tribes of his land. Once received, the emperor had these illustrations processed, edited. and a standardized format was generated. In the 6th month of Qianlong 16th year (1751), this project expanded into a nationwide scale', see Nie Chongzheng;Tributes to the Imperial Qing: in Sotheby's Hong Kong. 8th October 2006. pp.198-199.