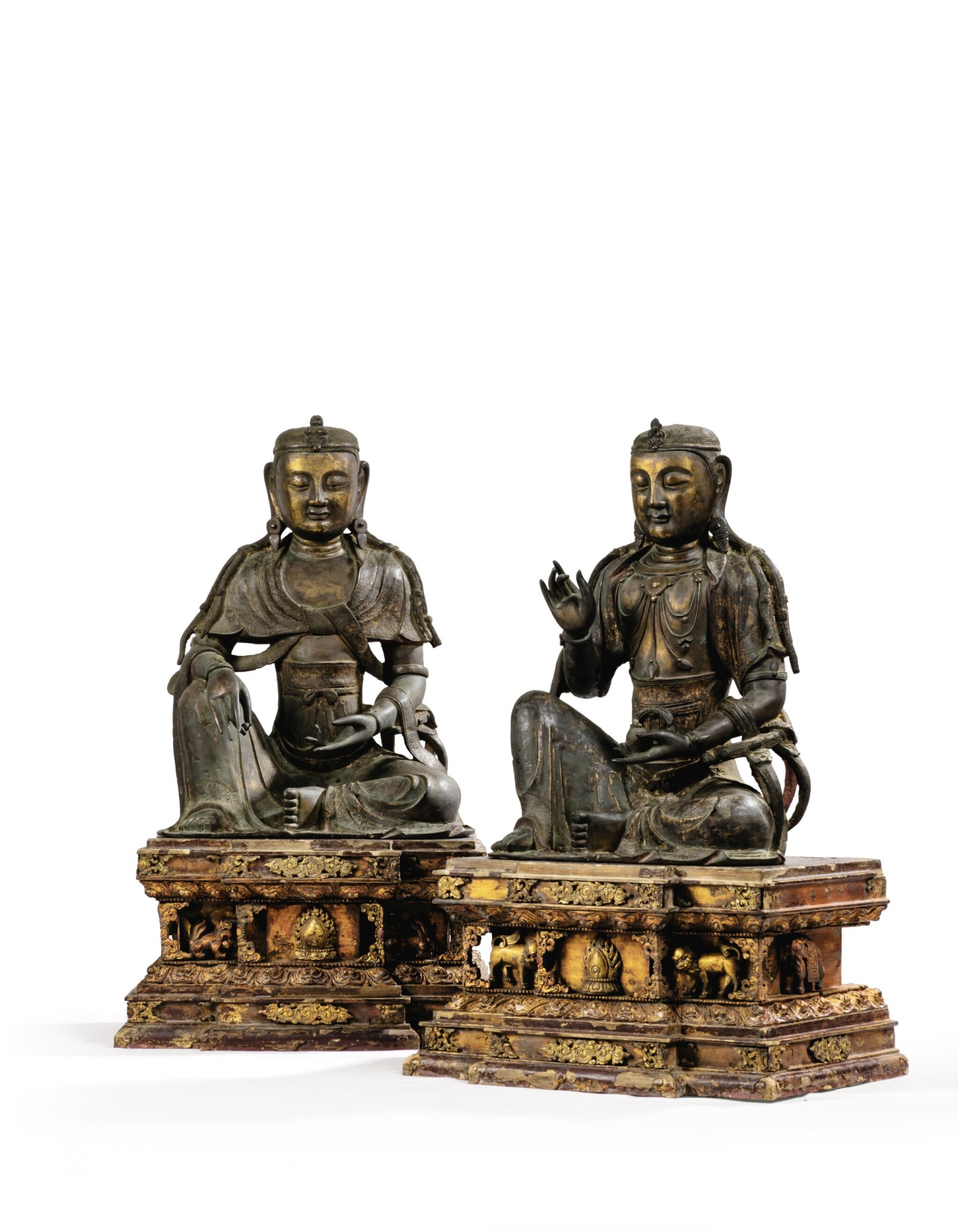 together with a pair of lacquer-gilt thrones, Qing Dynasty, 18th century

These rare figures are crisply and heavily cast. There are traces of polychromy to both figures. The face, the torso and the hands are fire gilt.

The head of the Buddha on the crown and some tips of the hair falling on the shoulders are missing. There are also some expected wear to the raised parts, and some scattered casting flaws, including one to the left leg and one to the lower back side of the figure.

Some of the tips of the hair falling on the shoulders are missing, possibly part of the attribute held on his left hand is missing.

There are overall wear, age cracks and flakes to the stands. The pole to the back-right corner is missing for both stands, and some of the floral decoration around the lower border have detached.

This important pair of parcel-gilt bronze bodhisattvas may originally have formed part of a larger group of figures, such as the Eight Great Bodhisattvas. They are among the few surviving Buddhist figures cast in bronze made in the 14th century during the Yuan or very early Ming dynasty, a short period of transition in style and iconography in Chinese Buddhist sculpture, making the present pair of figures exceptionally rare and important.

Both figures are stylistically related to Buddhist sculpture of the Song dynasty. A rare early example dated to the Song dynasty includes a small gilt-bronze figure of a seated bodhisattva, dated to the 12th/13th century of the Song Dynasty (AD 960 - 1279), in the collection of the Ashmolean Museum, Oxford, EA1956.1376. The small figure already bears the features that would become the hallmarks of Yuan and early Ming Buddhist sculpture, namely a fuller oval face, a bare chest with elaborate beaded necklace, a thin shawl covering the upper back and enveloping the shoulders, and a voluminous dhoti covering the lower part of the body from the waist to the ankles.

The style of the two parcel-gilt bodhisattvas offered here represents an evolution from that of the Song-period sculpture mentioned above, and their salient stylistic features mark them as a generation later than that figure, placing them in the 14th century of the Yuan or early Ming dynasties. Among the few gilt-bronze figures of this period they are closest stylistically to a large gilt-bronze figure of Avalokiteshvara, sold in Poly, Beijing, 19th June 2018, lot 5172, and illustrated in Meinrad Maria Grewenig and Eberhard Rist, Buddha. 2000 years of Buddhist Art. 232 Masterpieces, Voelklingen, Edition Voelklinger Huette, 2016, cat. no. 59. Like this important figure of a bodhisattva, the present pair of bodhisattvas show the same stylistic traits. Their slim, elongated torsi are bare, one of them is wearing an elaborate bejewelled necklace suspending several hanging chains held together by a central ornament. A thin shawl is draped across their shoulders and on one figure is tied across the bare torso. Both figures wear high-waisted skirts covering the lower part of their torsi are tied just below the ribcage. They share the simple circlet-shaped diadem around the head centered on a single jewel, a feature that can also be found on a large bronze head of a bodhisattva, offered in Sotheby’s New York, 21st September 2007, lot 22.

Both figures are seated with their right leg pulled up, a posture rarely found in Chinese Buddhist sculpture, and exemplified in a gilt-bronze figure of Sakyamuni, in the Cleveland Museum of Art Collection, and a larger dry lacquer figure of Sakyamuni, from the University Museum, University of Pennsylvania, both published in Shermann Lee, Chinese Art under the Mongols: The Yuan Dynasty (1279-1368), Cleveland, 1968, cat. nos. 18 and 19. Another figure made in Qingbai Porcelain and representing the Water Moon Guanyin, dated by inscription to 1298 or 1299 of the Yuan dynasty, from the collection of the Nelson-Atkins Museum of Art, Kansas City, is similarly seated resting the right arm on the right leg drawn against the body, see ibid., cat. no. 26.