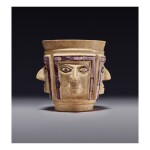 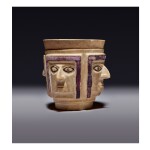 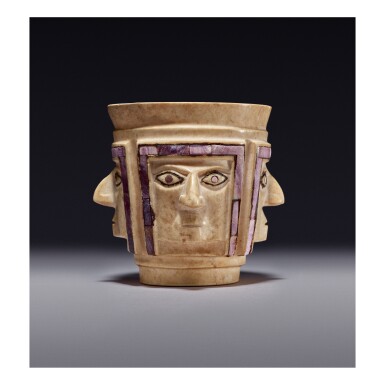 Overall excellent condition, areas of fill on the rim, visible by discoloration. One face with natural erosion, with some slight pitting on the proper right side of the face. Excellent details of nose and mouth and overall features. Some of the shell inlays likely replaced.

Mr. and Mrs. Robert Spitzer, New York, acquired from the above prior to 1969

Merrin Gallery, New York, acquired at the above auction

This finely carved stone cup is one of a small group distinguished by the four projecting faces of nearly identical form. The cup was carved in gypsum, known as alabaster, in thin section on a stepped foot. Each face is delicately sculpted with a prominent aquiline nose showing slightly flared nostrils, thin straight mouth and wide almond-shaped eyes with inlaid pupils under arched brows. Each face is framed by an even rectangular band of inlaid shell delineating the coiffure (or headdress) with remains of black resinous pitch shown on the edges. The rim is finely carinated to mirror the stepped foot.

It is an example of the small kero cup, keros being one of the most ubiquitous and important objects of Andean culture from the early Moche through the Inca period. Keros were used in the ceremonial toasts during the ritual consumption of chicha, a fermented drink made from maize. The large ceramic face-neck jars, showing the bold expressions and highly adorned frontal faces of dignitaries, are of similar style and concept to these rare four-face cups.

The projecting faces of the four-face cups enable the viewer to see both frontal and profile images simultaneously. A four-part design was prevalent in various Wari mediums such as four-cornered hats, and on inlaid ear frontals with four profile animal heads (see The Art Institute of Chicago, acc. no. 1955.254a,b). The four-part placement has directional significance as well as being related to the prevalent Andean concept of dualism and paired figures. Whatever the conceptual design signified to the ancient owner, we are confronted with the calm and mature idealized faces turning the vessel into a finely crafted work of art.

The Wari empire flourished in the Central Peruvian highlands from the 6th-9th century AD. The religious, social and political ideologies were eloquently represented in their art and material culture, particularly in the magnificent ‘theatrical arts of regalia’ (Bergh in Bergh ed., Wari, Cleveland, 2012, p. 217). The refined inlaid objects and fine tapestry-woven textiles of complete unku tunics were the most expressive of their luxury arts. Wari craftsmen mastered the art of inlay as seen in such dazzling works as the mirror at Dumbarton Oaks (PC.B.432), as well as ear ornaments, snuff tablets, necklaces, rectangular pendants, thumb-rests of atlatls, spoons, spatulas and stone cups. These objects were made in stone, wood or shell and were meticulously inlaid with a resinous material securing the tesserae that included purple and orange spondylus shell, purple mussel, mother-of-pearl, lapis lazuli, turquoise, serpentine, as well as gold and silver. Inlay, either as a flat design or sculpted figure, created a kaleidoscope of dazzling form. Bergh (ibid.) notes that inlay objects shared a colorful mosaic aesthetic with tapestry-woven, tie-dyed and feathered textiles.

Current scholarship continues to refine our understanding of the complex interrelationship between the Wari and Tiwanaku cultures, both dominating the Andean landscape from the coastal to Highland regions. “Enough can be said, however, to provide an appreciation of the immensity of Wari’s importance in the central Andean past". (Isbell and Young-Sánchez, "Wari's Andean Legacy", in Bergh, ibid., p. 251).