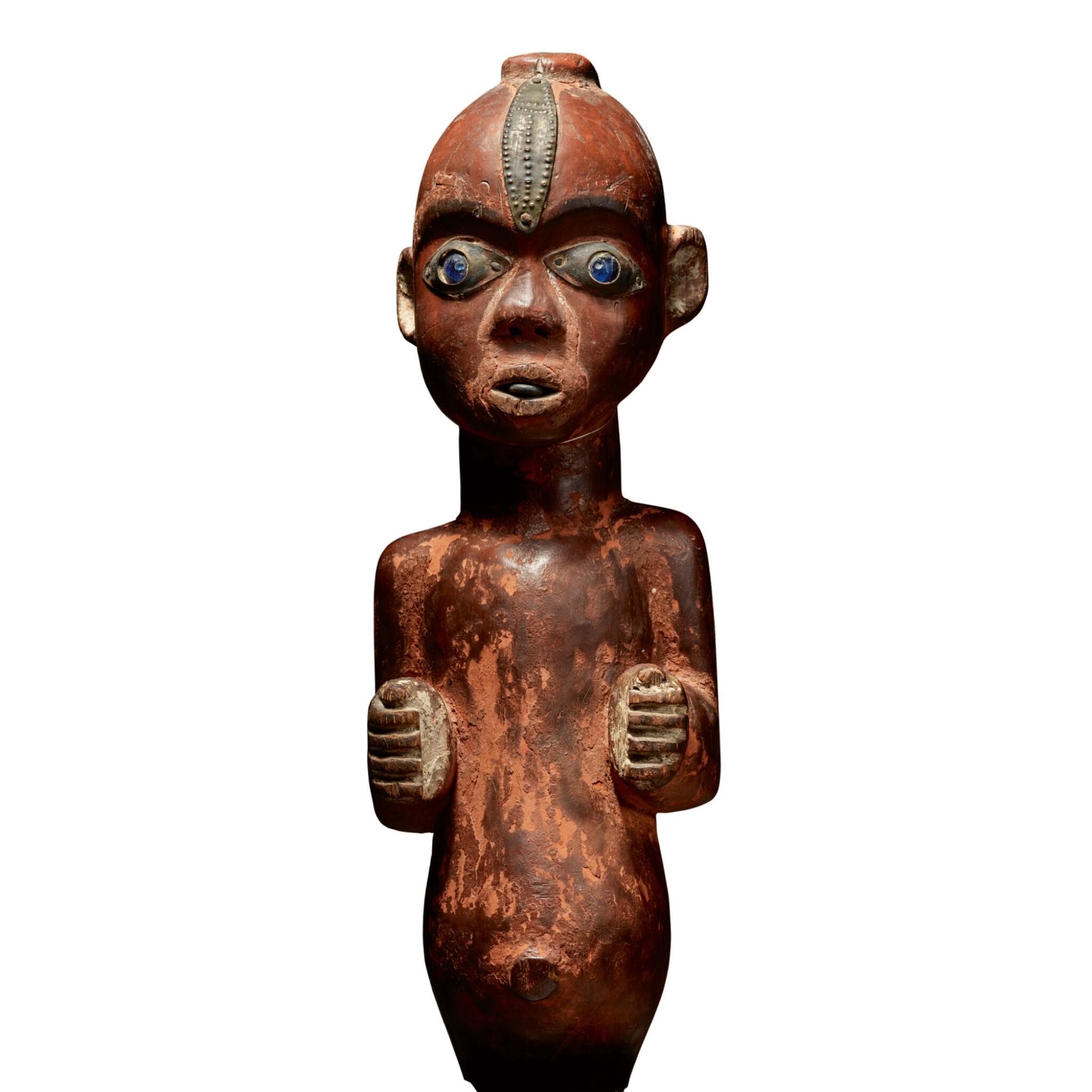 American Private Collection, acquired from the above after 1967

Like other Gabonese cultures - such as the celebrated Fang and Kota - the Tsogho people sculpted guardian figures representing ancestors which were incorporated into reliquary boxes or bundles. According to LaGamma, half figures of the present type were "attributed with great powers of protection and were integrated into the most profound dimension of religious experience, bwete ancestral rites. As among those neighboring cultures, the initiation society governed much of religious, social, and political life. According to Perrois [Perrois, "Art of the Kwele of Equatorial Africa: Ancestor Masks, Bush Spirit Masks", The World of Tribal Arts, vol. 6, no. 4, Spring 2001, p. 80]: 'The material of the [bwete] cult - the elements adorning sanctuaries, sculpted staffs, statues, masks, musical instruments - is rather diversified but has a very distinctly recognizable and homogeneous design, both in form as well as in color. Each color has a precise symbolic signification. Red, for example, is the symbol of the sacred and of life and is analogous to blood.'" (LaGamma, Eternal Ancestors, New York, 2008, p. 278)

The corpus of Tsogho half-figures share a set of typical characteristics: in the overall form of a small torso, terminating at the waist with or without a small cylindrical band, arms held to the body with elbows bent, and topped with a fleshy, naturalistic head of intense gaze. Covered in vivid red color and crusty accumulation of ritually applied pigment, and metal attachments including a linear plate vertically dividing the forehead, metal eyes occasionally inlaid with pupils of varying color - here glass of brilliant blue.

Tsogho half-figures are rare, but were present in early 20th century collections of avant-garde artists and collectors. For two closely related figures previously in the collections of the French surrealist and film producer Roland Tual, and the British sculptor Sir Jacob Epstein, respectively, see LaGamma, ibid., pp. 278-280, cat. nos. 96 and 97. Henri Matisse owned two Tsogho half figures, which can be seen in a photo of objects from his collection taken at the time of his death (Rubin, ed., "Primitivism" in 20th Century Art, New York, 1984, p. 142). Paudrat surmised that Matisse had likely acquired these before World War I (ibid., p. 143).