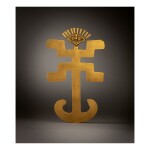 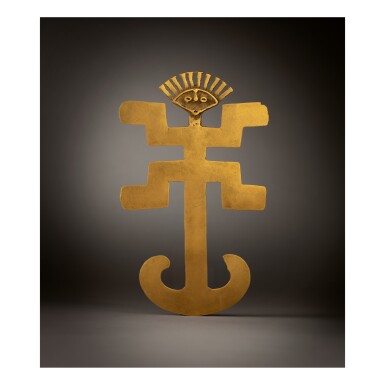 In good condition, with some minor losses to the perimeter including proper left tip of the "hooked tail", and edge of the proper left "hand." The silvery pink gold patina consistent, particularly visible on the reverse. The body particularly well and even hammered. Small white sticker on the reverse from the Museum of Primitive Art reading "Mitchell / 1018.69"

The Metropolitan Museum of Art, New York, The Art of Precolumbian Gold: The Jan Mitchell Collection, May 9- August 11, 1985

Tolima goldwork was part of a larger regional network known as the 'Southwest Colombian Metallurgical Tradition" which encompassed the Tumaco, Calima, San Agustin and Tolima areas (Bray in McEwan, ed. Precolumbian Gold: Technology, Style and Iconography, London, 2000, p. 102). The distinctive styles of this region feature lost-wax cast pendants of stylized animal and human figures charged with symbolic content. "The Tradition is as much an ideological phenomenon as a technological one"(ibid.).

The Tolima style includes pendants renown for their abstract form offset by the striking human expressions. Jones (The Art of Precolumbian Gold: The Jan Mitchell Collection, New York, 1985, p. 158) notes that Tolima figural pendants occur as either 'winged' figures, or as in this example, with the splayed body of stylized flattened limbs outspread symmetrically above the anchor-shaped 'tail'. It is notable how the hammered limbs are of equal length and width, creating a consistent geometry that is repeated on the face in a curvilinear fashion. The recessed facial area is roughened, with the delicate outline of the face, eyes, and mouth in raised bands. The head is surmounted by a ten-plumed headdress; a suspension loop is behind the slender neck.

For an example of a similar pendant with a spiked headdress, see Pillsbury, Potts and Richter, eds., Golden Kingdoms: Luxury Arts in the Ancient Americas, Los Angeles, 2017, cat. no. 90.