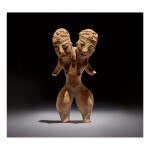 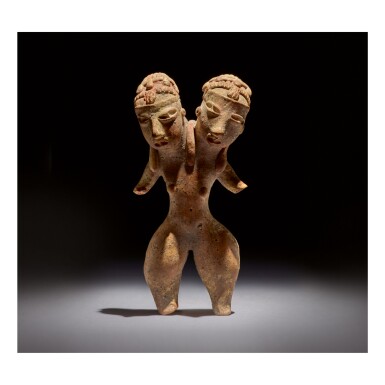 Julian Goldsmith, Chicago, acquired from the above

The Art Institute of Chicago, The Art of Tribes and Early Kingdoms, Selections from Chicago Collections, January 12-March 4, 1984

Coe referred to the Type D1 corpus as 'the ultimate refinement of the art of figurine-making in central Mexico... which are among the most beautiful objects of their size in all of the New World." (Coe, The Jaguar's Children, Pre-Classic Central Mexico, New York, 1965, p. 26). As shown on this figure, the double-head is comfortably positioned on a typical Tlatilco body with tiny waist ("wasp waist"), short arms and the well rounded bulbous thighs of youthful females. Often accented by red pigment of cinnabar or hematite, the elaborate coiffure and finely modeled eyes, nose and mouth are the focus of these delicate yet powerful female figures.