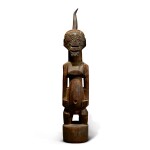 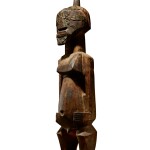 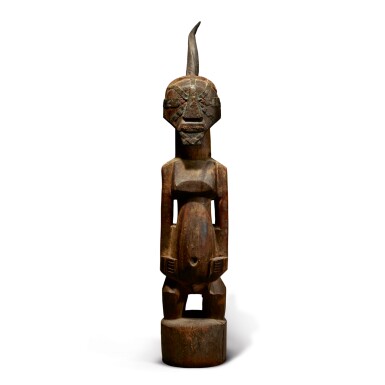 Property from the Collection of Allan Stone, New York

Allan Stone, New York, acquired from the above

Like the Kongo and other fellow Bantu cultures of central Africa, the Songye called upon supernatural forces which they believed could be contacted and manipulated in their favor through power sculpture, minkisi. While the Kongo adhered to certain prescribed types according to the nature of the problem requiring the nkisi’s assistance, maintaining certain sculptural formulae, the Songye sculptor-diviner (nganga) was unrestrained by such prescriptions.

This monumental power statue ranks among the very finest sculptures in the Songye corpus. The sculptor has succeeded in expressing a complex set of traits and emotions which connected to the Songye community using both naturalistic iconography and pure sculptural form. Today, far from its original context, the expression of negative and positive forces invoked by the sculptor, the diviner and their community still resonate powerfully from this masterpiece of African art.

The monumental scale and great artistic quality of the present figure suggest that it once served as an important community guardian. Of overall columnar form, it emerges from a solid integral cylinder. Rising from this cylinder are with deeply bent, softly defined legs, a swollen abdomen and hands held to either side of a recessed charge typical Songye form.

The magical materials, or bishimba, which activated this figure are emblematic of the corpus. Drawn from the natural world, they make reference to the attributes of the earth and animals and call upon their powers. At the top of the head is an antelope horn, filled with bishimba, and surrounded by deep, aged encrustation at the crown of the head. The figure probably once wore a headdress of fibers and feathers. The face is plated with copper, a reference to the power of the blacksmith and to lightning.

The art historian and anthropologist Hans Himmelheber stated: "the nganga buka, great sorcerers, of which there were only a few among the Songye, have such figures carved by professional sculptors called sende [or nsendwe, a smith]. The nganga then charges them with power to protect the local community, especially to safeguard the birth of children in their territory. All children possibly conceived by invoking the power figure or born while a particular power-figure reigns receive its name. In 1939, a great number of Kalebwe children were called 'Kima' after the power figure yankima, or 'the Father of Kima'. Once in the world, such a power figure will multiply [...] to such an extent that I found throughout the entire region small yankima statues. But this continues only as long as this yankima’s power is intact. After a while he will be replaced by another power figure (with another name and another personality).” (Himmelheber, Negerkunst und Negerkünstler, Braunschweig, 1960, p. 406).

The sculptor that conceived a figure would endow it with desired characteristics, in hopes that once activated, the spirit who took up dwelling in the figure would employ those traits in the oversight and protection of the community. The present figure portrays an unusually powerful set of characteristics. The head is massive, with relatively naturalistic proportions. The face is richly adorned with metal plates, and bears a confrontational expression with chin forward and teeth bared. Its eyes, delineated by shells, command direct eye contact. Thus, the viewer is confronted with a highly powerful, prevailing figure that would inevitably inspire both aggressive power and confidence in its magical abilities.