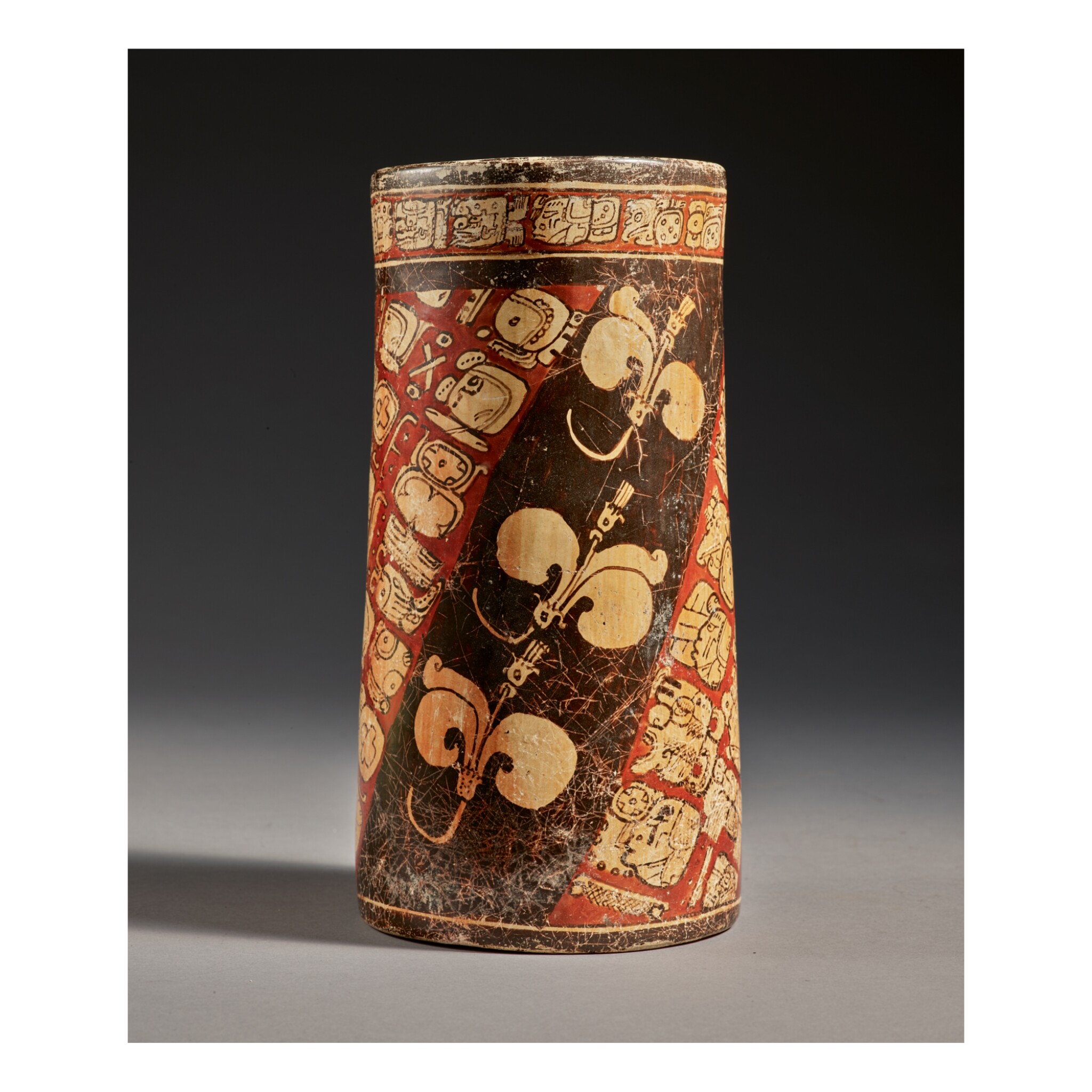 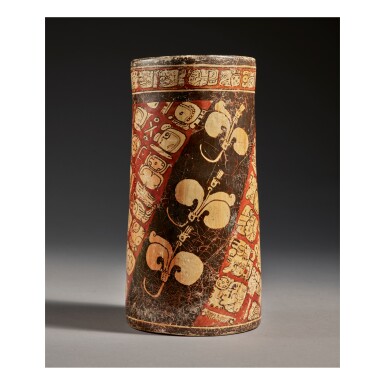 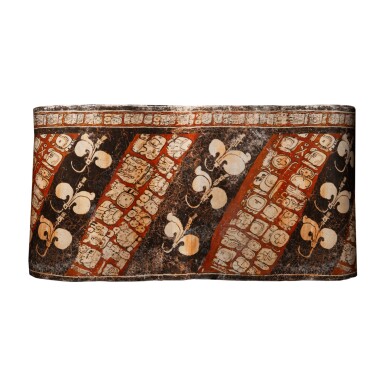 Maya polychrome ceramics were a primary artistic genre of the Late Classic era that recorded important historic and ritual events and complex mythological characters. The elegant cylindrical vessels known as uk’ib (cylinder vessels made for drinking chocolate) functioned as ceremonial and funerary ware and served as important portable social currency between the major regional centers of the Maya kingdom. Whether in a trade exchange or as a presentation offering for political or social effect, the finely painted surfaces of glyphic texts and detailed illustrative scenes, were a source of vital information on specific regional events, royal lineage, or mythological narratives. Bryan Just refers to the uk’ib as the “most sophisticated presentation of historical information for the Late Classic Maya." (Just, Dancing into Dreams, Maya Vase Painting of the Ik' Kingdom, Princeton, 2012, p. 59).

Ancient ceramic art was a refined technical process mastered by potters and painters over decades to achieve the consistent clay density and surface appropriate for fine slip painting. Recent studies combining epigraphy and chemical analysis of the clay tempers and slips, revealed the source and distribution of several distinct regional styles (Reents-Budet, Painting the Maya Universe: Royal Ceramics of the Classic Period, Durham, 1994). Black background vases, along with red-on-cream and black-on-cream painted cylinders, were the finest vessels from the Naranjo and Altun Ha Central Lowlands area.

This majestic black ground vase is one of less than dozen Maya vessels known with the fleur-de-lys motif. It was painted with two bold diagonal glyph bands against a deep reddish brown ground. These bands separate the floating "fleur-de-lys" motif. The rim text is a variation of the Primary Standard Sequence (PSS); this dedicatory text identified the vessel, its function and ownership, and sometimes named the artist who painted it. The PSS was a powerful dedicatory "name-tag" that reinforced and communicated “the ritual empowerment of the vessel through the act of painting (or carving) its surface.” (ibid., p. 158).

PSS texts standardly refer to a vessel as a vehicle for the consumption of ritual cacao. Reents-Budet‘s reading of this rim text described the poetic and unusual sequence in the repeated use the word for tsih ‘fresh’ or ‘new’. The text states the standard reference to drinking cacao, but with a unique repetition of (tsih), ta tsih (new substance), tsih hich (new surface), tsih ts’ib (new writing). (ibid., p. 156).

The diagonal glyph band on one side of the vessel is a double column and on the other side the band expands from a double into a triple column. The current reading of these glyphic texts indicates they are important lineage statements. They describe shifting political alliances between two rival city-states of the Naranjo area. The concept of lineage, rulership and authority is metaphorically illustrated by the repeated fleur-de-lys motifs. These graceful elements are graphic illustrations of the stamen and pistol of pollinating flowers. The imagery is a vivid and elegant reference from the natural world to reinforce lineage and reproduction. Black ground scenes often refer to the mysterious and powerful darkened waters of the underworld; referenced here with the flowers floating freely on the surface of the vase.

As Coe and Kerr note "the very act of naming things gave the Maya a degree of control over their universe." (Coe and Kerr, The Art of the Maya Scribe, New York, 1997, p. 59). For the Maya, a vase was never simply a vehicle for holding liquid in one’s lifetime or for the afterlife. It was itself a sacred and animate object, made so by its being written and painted on by the ancient artisans.