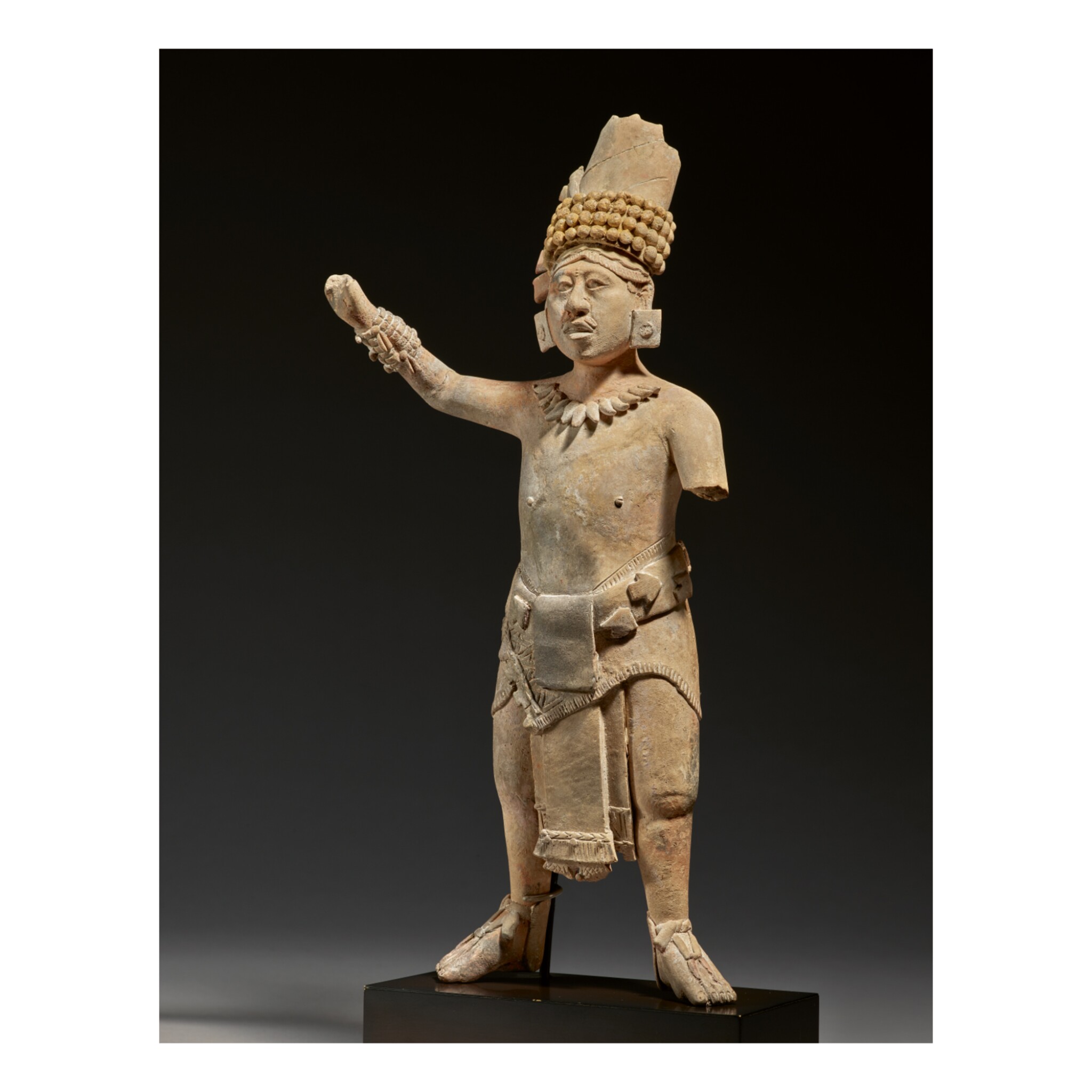 Overall condition excellent for a figure of this size. Obvious loss of lower proper left arm and fingers of the proper right hand, as visible in the illustration. Loss to the proper left turban flange. Some replaced beads on the headband. Areas of the torso, patterned skirt, proper right knee, proper right elbow, neck and small portion at the top of the turban showing areas of overpaint to even out the pitted surface. Details of the face, necklace, wristband, lower part of loincloth very good.

Maya ceramic figures provide the most intimate three-dimensional portraits of noblemen and women of the 6th-9th centuries. Figures occur in a broad geographic range, but the most refined and detailed are referred to as Jaina, named for the concentration of figures from the small island off the Campeche coast. Figures were placed in group assemblages that recorded rites of passage, ritual events and accession ceremonies, such as the 23 figures found in the cache chamber of a ruler in Southern Guatemala (Finamore and Houston, Fiery Pool: The Maya and the Mythic Sea, Salem, 2010, pp. 284-287). Most figures were made by a combination of molded elements with hand-modeled details. Current research suggests that some figures are portraits of individuals, not simply representations of a class or a type of noblemen and women. These assemblages of naturalistically rendered figures provide insight into the roles of specific individuals within Maya society and reveal a compelling narrative of the importance of Maya rituals.

This nobleman is one of the class of exceptionally tall Jaina figures which portray the important dignitaries and rulers of a court. He has a strong, well-proportioned body with his raised arm in an animated yet relaxed posture. The moustached face is highlighted by the scarification of three dots on the forehead, and he wears large rectangular jade earrings with ear tubes and a jaguar-tooth necklace. Finely striated hair extends below the tall wrapped turban headdress, which is decorated with rows of small cotton beads. His gesturing arm is wrapped with a wide bracelet of multiple rows of jade or shell plaques. The artist carefully included the knots and ties securing this ornament.

Of particular note is the elaborately layered loincloth. The long front hanging panels consist of an inner textile with cross band edges, and the outer panel with delicate selvedge fringe. The wraparound panel of the loincloth is also bordered with crossed bands, a glyphic compound associated with nobility. The outermost hip cloth is embroidered with enigmatic arrow motifs and tied with a short frontal flap. Such finely woven kilts and loincloths with detailed hems were significant attire for specific court individuals. As with all Maya attire, the details of headdress, jewelry and clothing serve as markers of status and authority.