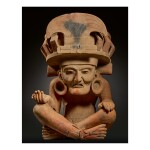 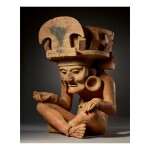 Wally and Brenda Zollman, Indianapolis, acquired prior to 1988

﻿Lee A. Parsons, John B. Carlson and Peter David Joralemon, The Face of Ancient America, The Wally and Brenda Zollman Collection of Precolumbian Art, Indianapolis, 1988, frontispiece and cat. no. 92

The Indianapolis Museum of Art, The Face of Ancient America: The Wally and Brenda Zollman Collection of Precolumbian Art, December 3, 1988-February 26, 1989

The Old Fire God is one of the earliest deities who remains omnipotent from the Formative era till the early Postclassic. His Nahuatl name Huehueteotl literally translates to “old old God.” Indeed, Huehueheotl’s mythology associates him as being a primordial creator deity along with Ometecuhlti and Omecihuatl, the “mother and father” of the gods (Matthew H. Robb, Teotihuacan: City of Water, City of Fire, San Francisco, 2017, p. 144). “Branded” during the Classic period at Teotihuacan, the aged fire god is consistently depicted as a seated hunched figural brazier, with a flattened head that supports a large incensario bowl. His face is wrinkled and wizened, alluding back to his own etymology. Matthew H. Robb notes that “these sculptures suggest a centuries-old conceptual link between the hunched figure of the old man and the smoldering volcanoes surrounding the Valley of Mexico” (ibid.).

The connection between Huehueheotl and volcanic activity is further illustrated by volcanic stone being the most frequent medium for sculptural representations. Robb notes this depiction “focused the fiery power of the smoking mountains into a compact package, simultaneously reducing its fearsome potential to the frailty of old age and channeling its energy into the domestic hearth” (ibid, p. 145). While found in both public and domestic spaces of Teotihuacan, the function of the braziers was likely ceremonial and associated with ritual incense burning. Their ubiquity also perhaps served as a unifying symbol that was recognizable to inhabitants of the heterogeneous city.

The present example presents a rare example of a large-scale depiction of Huehueheotl in ceramic, created by an artist working in Veracruz on the Gulf Coast in the Remojadas style. Large ceramic sculpture is a hallmark of Remojadas artistic production, which is a marked departure from the stone sculptures of the god that proliferate at Teotihuacan. The cultural exchange between the two geographical regions occurred due to Teotihuacan establishing control over small polities in Veracruz towards the end of the Early Classic Period (circa AD 400), which resulted in active trade routes. In addition to scale and medium, the formal treatment of this Old Fire God is also distinctly Remojadas. It has the buff clay paste color of Veracruz, rather than the orangeware of Teotihuacan. Also typical of the style is the gaunt, sensitively modeled sagging face as well as the depiction of intricate knots on the forehead and the detailing on the sandals, fingers and toes. The result is a figure imbued with a pathos and vitality that is lacking in the static renderings of Huehueteotl in Teotihuacan examples.