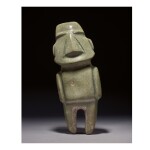 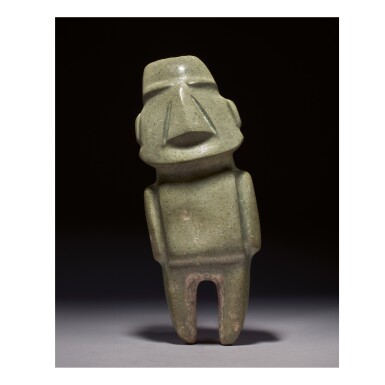 Acquired by the grandfather of the current owner in the 1960s

Carlo Gay dedicated forty years of his life to creating a stylistic taxonomy of Mezcala figures. The present example, notable for its large size, exhibits some qualities present in the M-16 figures such as its arms hugging the sides of the body and others more akin to the M-12 type, such as the treatment of the eyebrows in relief (see Gay and Pratt, Mezcala, Ancient Stone Sculpture from Guerrero, Mexico, Geneva, 1992, pp. 58-64, 72-76). While Gay was able to create a comprehensive system for discussing the formal qualities of Mezcala figurative sculpture, he was less concrete in assigning precise meaning to their function: “It is unlikely that [the figures] were created quixotically, and safer to assume they had some esoteric significance based in magic or religious principles. Probably, they are all inherently symbolic, conveying complex messages about beliefs of the living, and hopes of the dead.” (ibid., p. 21).