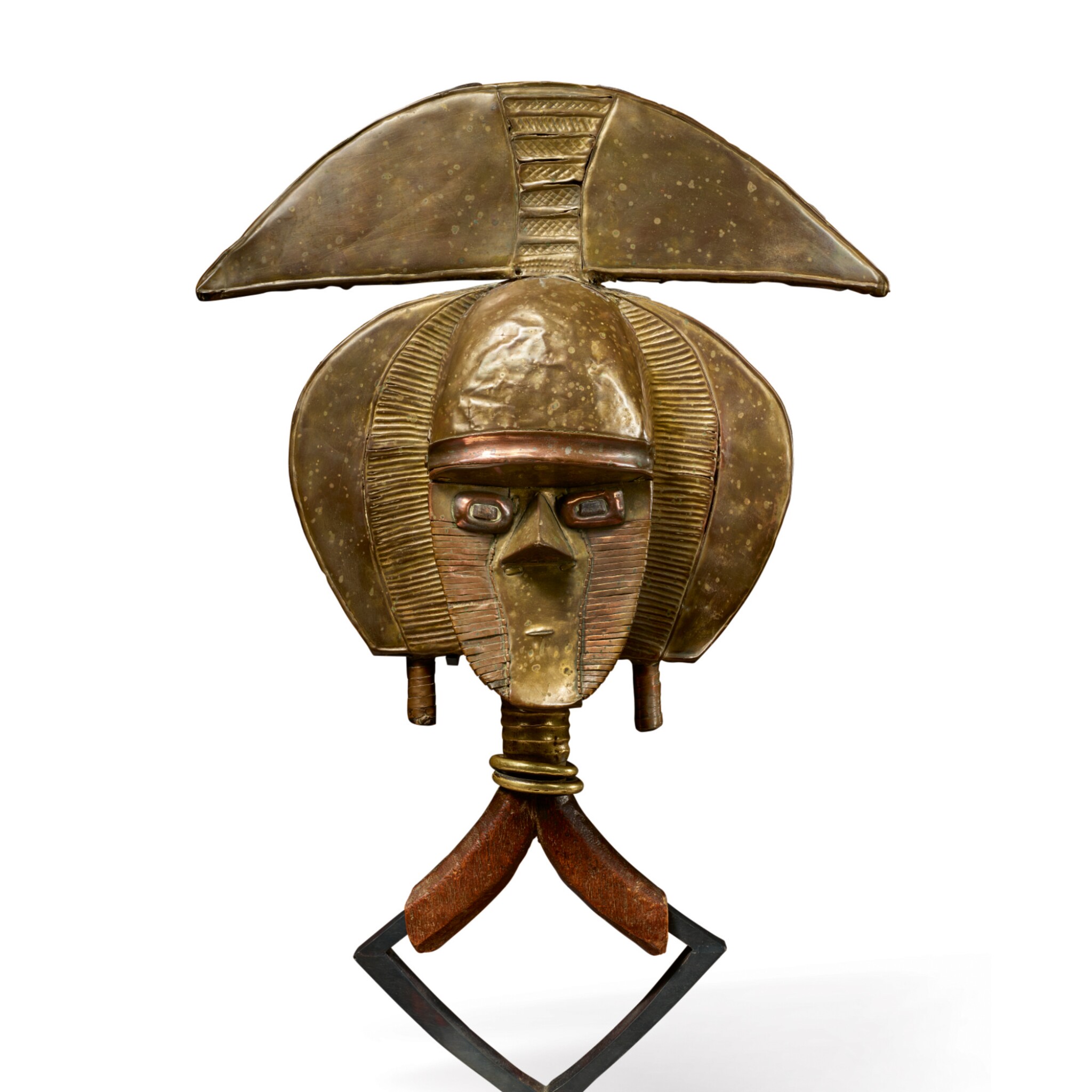 This exceptional image of an ancestor for a reliquary ensemble is the work of a highly individual 19th century Kota artist. Two closely related works share distinctive attributes with the present figure which allow us to attribute the three to the same atelier or master sculptor. A janiform figure previously in the Tishman Collection is today in the National Museum of African Art, Smithsonian Institution, Washington D.C. (see Vogel, For Spirits and Kings, New York, 1981, p. 199, cat. no. 118; inv. no. 2005-6-104), and another janiform figure was published by Charles-Wesley Hourdé (Realm of the Ancestors, Paris, 2018, pp. 24-27). Attributes of this style include a smoothly rounded convex half-oval forehead above a straight horizontal brow; embossed eyes of concentric ovals rendered in deep repoussé, on either side of a cubistic pyramidal nose.

The present work departs from the other two with a decidedly original flourish on the reverse: a large triangle rendered in high relief, enclosing a set of straight vertical grooves. This abstract geometric arrangement may refer to the clan of the ancestor represented as a kind of heraldic sign.

The sculptural quality of the present work is matched with a distinguished early history, which is especially notable for the very early date that it was first exhibited in the United States: in 1937 it was exhibited at the Brooklyn Museum in New York, as part of the pioneering exhibition of the collection of Frank Crowninshield (African Negro Art from the Collection of Frank Crowninshield, March 20 - April 25, 1937).

The African art collection of Frank Crowninshield was in effect the work of the extraordinary John Graham, artist and avant-garde savant, who was almost entirely responsible for the selection of objects. An emigré from Tsarist Russia, Graham was an aesthetic patrician who introduced the American avant-garde to developments in Paris and served as influential guide in the careers of Adolph Gottlieb, David Smith, Jackson Pollock – who sought Graham out after reading his 1937 article Primitive Art and Picasso - and Willem De Kooning, who thought him one of “the smartest men on the scene” when they met in the 1930s (Stevens and Swan, De Kooning: an American Master, New York, 2004, p. 93). Graham’s "eye" and incisive aesthetic judgments were equally sought by collectors; the Cone sisters of Baltimore and Duncan Phillips, founder of the Phillips Collection in Washington, D.C., gave him stipends to spend the summer in Paris. It was there that he bought African sculpture for Crowninshield’s collection, probably beginning in 1925. (Clarke, "John Graham and the Frank Crowninshield Collection of African Art", Winterthur Portfolio, Vol. 30, No. 1, Spring 1995, p. 28). Graham exhibited his own paintings in Paris and was familiar with artists, critics, and the preeminent dealers of the period - Louis Carré, Paul Guillaume, Galerie Percier, and Charles Ratton - as well as with vanguard collectors, including the critic and anarchist Félix Fénéon.

While Graham was at the heart of the avant-garde, Crowninshield had his own impeccable credentials as a promulgator of Modernism. Crowninshield helped organize the New York Armory Show of 1913, was a founding trustee of the Museum of Modern Art, and in 1926 appeared as a witness for the defense in the legal case to prove that Brancusi’s Bird in Space was a work of art and not a utilitarian object subjective to a prohibitive rate of tax. As the editor of the original incarnation of Vanity Fair from March 1914 to its end in February 1936 Crowninshield presented a high modernist aesthetic to a refined audience. The New York "slick" reproduced works by Braque, Modigliani, and Picasso, and published the photographs of Sheeler, Steichen, and Stieglitz, considered as works of art accompanied by critical texts. Crowninshield printed Gertrude Stein’s "If I Told Him: A Completed Portrait of Picasso"; John Quinn, the pioneering collector of Modern and African art defended the work of his friend James Joyce; Carl Van Vechten wrote monthly on the Harlem Renaissance. Crowninshield was one of the earliest enthusiasts to form a large and serious collection; by his own account he owned around "a hundred and fifty African masks and sculptures." (Hellman, "Last of the Species - I", The New Yorker, September 19, 1942, p. 23). Objects from his collection were included in African Negro Art in 1935, and with Helena Rubinstein and Tristan Tzara, he was one of three collectors to lend African sculptures to Cubism and Abstract Art at the Museum of Modern Art in 1936.

The spread of modernist ideas is perhaps Crowninshield’s greatest achievement, both as editor at Vanity Fair and as a collector of African art, which this impresario of pre-war café society introduced to an audience who were intrigued by - if not necessarily themselves part of - the avant-garde. As the critic Helen Appleton Read wrote in 1930, Crowninshield’s "ability to sense the psychological moment when new ideas and new forms in art are emerging from unpopular radicalism […] to recognizable and acceptable expressions of the spirit of the age is a species of clairvoyance." (cited in Clarke, ibid.).