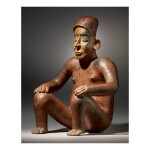 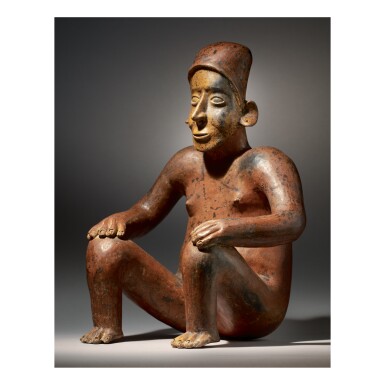 The ceramic figures of ancient West Mexico commemorate important persons of the community. The sculptures represent warriors, chiefs, marriage couples, ballplayers and other individuals, providing a link to the 'heritage of power' and social diversity of the ancient societies.

This large seated male shows the forthright and confident demeanor of a mature chief or important ancestor. His well delineated and slightly clenched hands, characteristic of the Ameca style, rest firmly on his slender bent legs in a manner of authority. His softly contoured torso belies the body of an elder statesman and his face has well modeled cheeks and a firm gaze, suggesting portraiture.

Ceramic figures from the Jalisco region are some of the largest of the ancient West Mexican tradition. The Ameca-Etzatlán style is defined by the naturalistic depiction of male and female figures, with body color ranging from creamy gray to reddish brown reflecting regional variations. The Jalisco region was one of the earliest areas to be explored in the late 19th century by Adela Breton. She visited sites in the Tequila Valley which have been recently extensively studied for their ceremonial spaces and architectural remains. The guachimontón formations of tiered circular platforms, are considered dedicated spaces for performative rituals, lineage ceremonies and feasting events organized by the ranking chief or shaman.