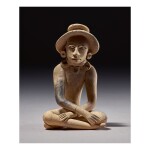 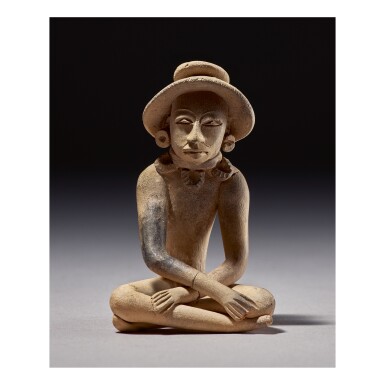 Like the preceding lot, this subtle and sensitively modeled figure is a rare example of the exquisite miniature sculpture of Panuco. It appears to be one of the two known "seated personages […] wearing carefully-worked Jacobean-style hats" (Griffin in Goldstein, ed., Ceremonial Sculpture of Veracruz, Brookville, 1987, p. 21).

This figure, which retains the relaxed and dignified bearing of the preceding lot, wears a necklace, ear-spools, and a large hat. Discussing the other figure with a hat, Griffin expresses his belief that the hat "was modeled to the head in clay to leave no doubt as to the identity or rank of the wearer." (ibid.).

See Goldstein, ed., ibid., p. 44, cat. no. 7 for the other figure, once on loan to the Princeton University Art Museum.